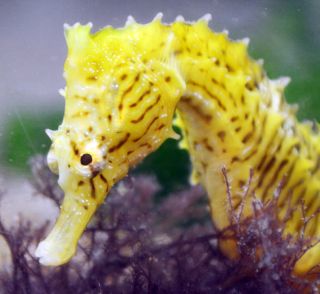 The dwarf seahorse, Hippocampus zosterae, has a head perfectly shaped to sneak up on fast-moving copepods.
(Image: © Brad Gemmell)

Seahorses are unique among fish for having bent necks and long-snouted heads that make them resemble horses. The overall shape of their body, including the lack of a tail fin, helps make them "one of the slowest swimmers on the planet," said Brad Gemmell, a marine biologist at the University of Texas at Austin. "They don't swim very much — they tend to anchor themselves to surfaces like seagrass with their prehensile tails." (Prehensile tails, like those of monkeys, can grasp items.)

Gemmell and his colleagues were investigating how seahorses and other fish feed on microscopic shrimplike crustaceans known as copepods. [In Photos: The Freakiest-Looking Fish]

"Copepods are really important," Gemmell said. "They're fed on by a wide majority of marine animals during some point in their life histories — in particular, a lot of commercially harvested fish."

Since virtually all marine animals like to eat copepods, "these crustaceans have evolved some very impressive escape behavior," Gemmell said. "They're very, very sensitive to disturbances in the water, such as those created by approaching predators."

Unexpectedly, even though seahorses are slow swimmers, "they were very effective at capturing these very fast-swimming, highly evasive prey," Gemmell told LiveScience.

Seahorses use their arched necks as springs to pivot their heads forward and catch prey. This limits the distances at which they can seize victims to only the length of their necks, about 0.04 inches (1 millimeter). However, seahorses nevertheless could get close enough to copepods to capture them.

"We found they captured copepods more than 90 percent of the time, which is extremely effective for any sort of predator, much less with such elusive prey," Gemmell said.

To find out how these fish catch their victims, the researchers experimented with the dwarf seahorse Hippocampus zosterae, which is native to the Bahamas and the United States and is only about 1 inch (2.5 centimeters) long. They suspended these fish with copepods in water loaded with hollow glass beads about one-sixth the average diameter of a human hair. They shone lasers into this water that illuminated the beads.

By analyzing how the beads moved as seahorses preyed on copepods, the scientists could deduce how they made the water flow around them in three dimensions. They found that the water around the seahorse snout barely moves while the hunter approaches its victims, helping the seahorse to close in undetected.

Gemmell and his colleagues Jian Sheng and Edward Buskey detailed their findings online Nov. 26 in the journal Nature Communications.

Relatives of seahorses, such as pipefish and sea dragons, also have heads with long, narrow snouts, and so may also benefit from what the researchers call "hydrodynamic stealth." In contrast, Gemmell and his colleagues found that fish with relatively blunt heads, such as zebrafish, could capture copepods by sucking in water as they move toward prey. "They suck in water at about the same speed as they move forward so they're not pushing as much water in front of them toward prey," Gemmell said.