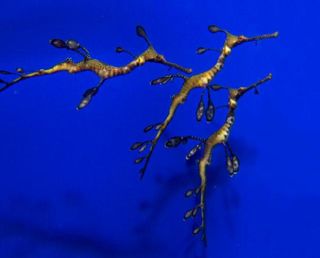 The new weedy sea dragons are ready for their closeups.
(Image: © Georgia Aquarium.)

The weedy sea dragons that hatched this summer at the Georgia Aquarium are ready for their time in the spotlight.

The baby sea dragons, born June 26 and 27, rejoined the grownups on the aquarium floor Nov. 2. The Georgia Aquarium is only the third facility in the United States to successfully hatch weedy sea dragons, which are technically fish.

"They're doing great," said Kerry Gladish, a senior aquarist at the aquarium, located in Atlanta. "Better than I think any of us expected."

Weedy sea dragons (Phyllopteryx taeniolatus) are relatives of sea horses and pipe fish and live in the shallow coastal waters of southern and western Australia, including the southern tip of Tasmania, where they are camouflaged in kelp forests and coral reefs.

Sea dragons sway more than they swim; their leaf-like fins and limbs are nearly transparent and mimic the movement of seaweed and sea grass. Camouflaged armor-like plates and a long snout complete the package. Hiding from predators among the weeds and kelp is their only means of self-defense.

Weedy sea dragons are about as active as seaweed, but they have plenty of stealth. Their tube-like mouths vacuum young fishes and small shrimp-like crustaceans that swim too close.

The Georgia aquarists have closely watched the young sea dragons at meal time poor feeding would be a red flag and the youngsters are navigating and feeding with no problems, Gladish told OurAmazingPlanet.

Since male weedy sea dragons don't really hunt or gather, they may as well help with the birthing. Females lay up to 300 gooey eggs that stick to the soft underside of the males' tails. When a male is ready to receive the eggs, its tail turns bright yellow and swells Gladish calls this the "landing strip."

After a while, the males' bodies grow around each egg and harden, keeping the eggs safe during brooding. After about two months, the bright pink eggs hatch into miniature juveniles, which in the wild settle into the seaweed and sea grass.

At the Georgia Aquarium, when the male's tail was covered in eggs, aquarists placed the male inside a special floating basket within the main weedy sea dragon tank. When the babies hatched they were less than 0.4 inches (1 centimeter) long and weighed less than an ounce (28 grams). Because of their tiny size, the babies were moved into their own tank away from predatory adult dragons so aquarists could monitor and feed them a special diet.

Today the new babies are about 4 to 4.5 inches (10 to 11 cm) long. They are about half the size of the adults, but they are big enough to forage for food alongside the 10 grownups in the exhibit.

A young weedy sea dragon closely resembles an adult except that it is smaller, less colorful and has a much shorter snout.

Weedy sea dragons have also hatched at the Aquarium of the Pacific in Long Beach, Calif. and at the Tennessee Aquarium in Chattanooga.

The weedy sea dragon is listed as "endangered" on the International Union for Conservation of Nature's Red List of Threatened Species and is a protected species in its indigenous western Australia and Tasmania.