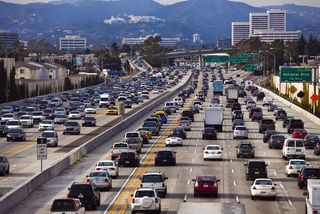 Fewer people plan to drive to visit friends and family for Thanksgiving this year than in 2012, according to estimates by auto association AAA.

The auto club's annual travel forecast predicts that 43.4 million Americans will journey more than 50 miles (80 kilometers) from their homes this week, a 1.5 percent decrease from 2012. About 90 percent of those Thanksgiving trips are by car, as are most personal long-distance journeys throughout the year, AAA said in a statement.

Holiday travelers on the East Coast will also face wintry weather if they head out on Wednesday, one of the biggest travel days of the year for both drivers and those traveling by air. The deadly system has already caused fatal traffic accidents in New Mexico, Oklahoma and Texas as it tore across the country from the southern Rockies. Now, snow and freezing rain are forecast for the Northeast on Wednesday, the Weather Channel reports.

The weather system could also cause significant delays at airports along the East Coast. Though AAA said total Thanksgiving air travel would be only 3.14 million people from Nov. 27 to Dec. 1, a 3.7 percent drop from 2012, a trade group for the airline industry expects the number of fliers to increase by 1.5 percent this year. The group, Airlines for America, said there would be 25 million fliers during a 12-day period before and after Thanksgiving (Nov. 22 to Dec. 3). Airlines for America predicted 2.42 million people would take to the air on Wednesday, Nov. 27, one of the three busiest flying days each year.

Thanksgiving itself is the least busy day to fly, Airlines for America said in a statement.

But drivers shouldn't expect empty roads on Thanksgiving, according to the Department of Transportation's Bureau of Statistics. Most short jaunts of less than 100 miles (160 km) are made on Thanksgiving Day, meaning some families face traffic jams even on the holiday. (These travelers also tend to return home on Saturday instead of Sunday.) [How to Cope with Holiday Gridlock]

Here are some more interesting predictions AAA has for travel for Thanksgiving 2013: