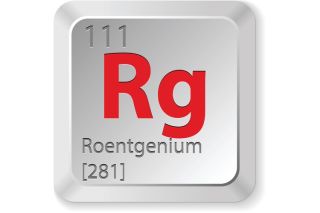 Discovery: Element 111 was discovered by the Gesellschaft fur Schwerionenforschung team led by Peter Armbruster and Gottfried Münzenber in late 1994. They produced three atoms of 272Rg.

Roentgenium is a radioactive, synthetic element about which little is known. It is classified as a metal and is expected to be solid at room temperature.

Roentgenium has seven isotopes whose half-lives are known. The most stable isotope is 281Rg, with a half-life of about 26 seconds. It decays through spontaneous fission.

Roentgenium is produced artificially. The team that discovered it bombarded atoms of bismuth with ions of nickel in a linear accelerator to produce element 111.

The atomic weight for manmade transuranium elements is based on the longest-lived isotope in the periodic table. These atomic weights should be considered provisional since a new isotope with a longer half-life could be produced in the future. [See Periodic Table of the Elements]

Only a few atoms of roentgenium have ever been made, and they have no current application outside of scientific study.