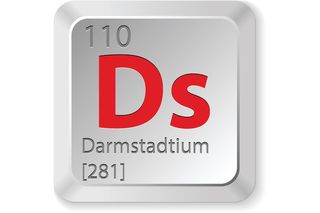 Word origin: Darmstadtium is named for the city of Darmstadt, Germany, where it was discovered. The name was confirmed by the International Union of Pure and Applied Chemistry in 2003.

Discovery: On Nov. 9, 1994, element 110 was discovered by the Gesellschaft fur Schwerionenforschung team led by Peter Armbruster and Gottfried Münzenber. They used a linear accelerator to bombard more than a billion billion nickel ions at a lead target for a week, resulting in one atom of darmstadtium-269 (269Ds).

Darmstadtium is a radioactive, synthetic element about which little is known. It is classified as a metal and is expected to be a solid at room temperature. The first produced atoms had a lifetime of only 1/100th of a second, but scientists later produced heavier, more stable versions.

Darmstadtium is produced artificially. It is made by fusing a nickel and lead atom together, and is a rare reaction occurring only when nickel atoms are projected at a lead target at a very specific velocity.

Only a few atoms of darmstadtium have ever been made, and they are currently only used in scientific study.