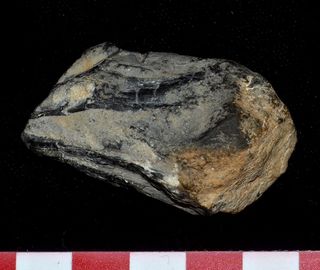 This fossil discovered in Berlin-Ichthyosaur State Park in Nevada may be part of the beak of an ancient giant cephalopod, such as an octopus or squid.
(Image: © Mark McMenamin)

DENVER — Did a giant kraken troll the Triassic seas, crushing ichthyosaurs and arranging their bones into pleasing patterns?

It sounds like a Halloween tale, but researchers who first suggested the existence of this ancient sea monster in 2011 say they now have more evidence backing up their controversial theory. Not only have they discovered a second example of strangely arranged bones, they've found a fossil that appears to be the beak of an ancient squid or octopus.

"This was extremely good luck," said Mark McMenamin, a paleontologist at Mount Holyoke College in Massachusetts who presented his findings here Wednesday (Oct. 30) at the annual meeting of the Geological Society of America (GSA). "This was finding the needle in the haystack, really." [See Images of New 'Kraken' Fossils & Lair]

Still, the kraken theory has not gained widespread acceptance.

"A kraken isn't really necessary," said David Fastovsky, a paleontologist at the University of Rhode Island who attended McMenamin's GSA presentation and penned a response to the evidence for the Paleontological Society. "Everything can be explained by much less exotic means."

McMenamin caused a splash when he and his colleagues first floated the idea of the kraken at a GSA meeting in 2011. The evidence: A bizarre arrangement of vertebrae of the ichthyosaur Shonisaurus popularis found in Berlin-Ichthyosaur State Park in Nevada.

S. popularis was a school-bus-size, flippered marine reptile that lived during the Triassic period, 250 million to 200 million years ago. The bones of one of these ichthyosaurs were found in a strange linear pattern. McMenamin and his colleagues argued that they were arranged there by a giant cephalopod (an octopus or squid) playing with its food.

This hypothesis isn't quite as out there as it may seem: Modern octopuses are known to manipulate bones, shells and other debris to form middens, concealing the entrances to their dens. And today's giant squid are known to battle it out with sperm whales, as evidenced by tentacle scars found on whales and squid found in whale stomachs. The bone arrangements could be the earliest evidence of cephalopod intelligence, McMenamin said. [Release the Kraken! Giant Squid Photos]

Still, the idea engendered a lot of backlash. Glenn Storrs, the curator of vertebrate paleontology at the Cincinnati Museum Center, summed up the skepticism to LiveScience in 2011, calling the weird bone arrangement "circumstantial evidence."

The kraken is back

Now, McMenamin has more. First, he argues, the arrangement of bones could not have been made by natural processes like currents or mud compaction. The shape of the bones is such that there is "virtually zero" probability that currents could have nudged them into that arrangement, McMenamin told a crowded auditorium of geoscientists at this year's meeting.

"You always go from a more ordered to a less ordered state, not the other way around," he said.

The organized state of the bones is the strongest evidence that some intelligent creature arranged them, McMenamin told LiveScience. But something else came up that has him convinced: A second example of the weird bone pattern.

This one comes from an ichthyosaur fossil formerly on display at the University of Nevada, Las Vegas Museum of Natural History. The fossil had been laid out in the museum exactly as found in the field. The exhibit is long gone now, but a curator passed a photo on to McMenamin.

"When I saw that photograph, basically my eyeballs popped out," McMenamin told LiveScience.

Next to the ichthyosaur was a "debris pile" of scattered bones that were no longer in their proper place in the skeleton. And off to the side was a double row of vertebrae in the same configuration as McMenamin and his colleagues had seen in the original ichthyosaur remains.

The rib cage of the museum specimen shows damage, as if something — perhaps the tentacles of a giant deep-sea monster? — had constricted them in a bear hug.

"We think one plausible explanation of this is an attack on the icthyosaur by a much larger predator," McMenamin said.

Once he saw the museum photograph, McMenamin made a field expedition back to Berlin-Ichthyosaur State Park, where he and his colleagues combed through fossils weathering out of rock in search of more cephalopod evidence. Almost unbelievably, they found it.

Among the fossils the team collected on their trip was a strange, pointed object that McMenamin almost tossed, thinking it might be a fish. But the fossil had un-fish-like fibers running through it, so he hung on to it. Months later, he bought a modern Humboldt squid beak off eBay for $60 and compared it to the ancient fossil.

The fracturing patterns and fibers matched. McMenamin thinks he has the beak of an elusive Triassic kraken.

The fossil "shows that indeed there were giant cephalopods in this area," he said.

If the fossil is indeed a beak, it's too fragmentary to prove the size of the cephalopod it belonged to, Fastovsky told LiveScience. He found the rest of McMenamin's new evidence similarly unconvincing.

The measurement McMenamin used to dismiss the notion of currents moving the bones was "absolutely inapproprriate for the question he is addressing," Fastovsky said. The analysis measures the probabiliy of a point in a circle falling in a certain pie-slice of that circle, he said, not the relative stability of vertebrae in currents. In fact, Fastovsky said, little is known about the currents of the time, and no one has ever measured what it would take to shuffle vertebral fragments around.

Fastovsky also pushed back against the modern analogues for the hypothetical kraken's behavior. Octopus middens aren't organized in nice rows, he said. They're piles of debris. And sperm whales attack squid, not the other way around.

There's a simpler explaination, Fastovsky said. Ichthyosaurs die. They sink to the bottom, where scavengers get to work stripping their skeletons of flesh. The tendons and ligaments that held the vertebrae together rot away or are eaten.

"What happens to that vertebral column?" Fastovsky said. "Well, the first thing that happens is it sort of starts to fall over almost like a row of dominoes."

The weird tiled position actually appears to be the most stable position for those falling dominoes to end up at rest, Fastovsky said.

"A perfectly reasonable, pedestrian, coherant story emerges that doesn't require wholesale invention of what is unknown or unprecendented," he said.

McMenamin says he hopes for more debate on his findings. So far, he said, the response to his talk has been positive.

"We're getting a message from the past," he said, "So I'm hoping the discussion is better this time."

Editor's Note: This story was updated with additional quotes at 3:20 pm Eastern Time.