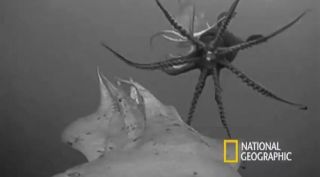 A Crittercam attached to a Humboldt squid captured some amazing footage, as this screengrab shows.
(Image: © Stanford University)

To see firsthand how an elusive species of jumbo squid lives, scientists have strapped video cameras to the carnivorous sea creature in the eastern Pacific.

The footage has helped reveal some remarkable secrets of the Humboldt squid: They are capable of amazing bursts of speed, up to nearly 45 mph (72 km/h); they "talk" to each other by changing their body color; and they hunt in big synchronized groups.

Humboldt squid (Dosidicus gigas) — which can grow to more than 6 feet (2 meters) in length and 100 pounds (45 kilograms) in weight — have razor-sharp beaks and toothed suckers. Mass strandings of the species and reports of aggression toward humans have spooked beachgoers for decades, but the jumbo squid are not man-eaters — they usually feed on small fish and plankton that are no more than a few inches in length, though they sometimes cannibalize each other.

For all the squid's captivating features, scientists still have many questions about the species' behavior, so biologists at Stanford's Hopkins Marine Station turned to the National Geographic Society's Crittercam, which has been used to study animals ranging from penguins to hyenas. [Image Gallery: Humboldt Squid Stranding]

Attaching a quart-sized device with a camera and sensors to a squid presents some technical problems. The trick is to find a big enough squid and fix the Crittercam onto a child's bathing suit so that it can be slipped over the creature's fins like a spandex sleeve, Stanford biologist William Gilly explained in a video.

The resulting video footage and data from echosounding studies showed that Humboldt squid can jet-propel themselves at speeds comparable to the fastest ocean fish. They hunt in tightly coordinated groups, a behavior that's usually associated with fish rather than invertebrates (animals without a backbone) like squid, the researchers found. And smaller squid tend keep their distance from the bigger ones, likely to avoid being cannibalized.

Jumbo squid are known to have pigmented cells, called chromatophores, which allow them to change color in response to neural impulses. The cameras allowed the researchers to watch the squid flashing like a strobe light in their natural habitat. Gilly said the only time the squid seem to make these red-and-white color signals is when they encounter another individual of their species.

"We don't know exactly what those discussions mean," Gilly said in a video from Stanford. For now, interpreting those interactions is like trying to decipher what two people are saying to each other just by watching their mouths move, he added.

Humboldt squid live in the eastern Pacific Ocean from the tip of South America up to Mexico, but have been moving farther north in recent years. Scientists believe the species might be migrating up the coast as warming oceans are creating larger low-oxygen zones deep below the surface, environments where the squid live.