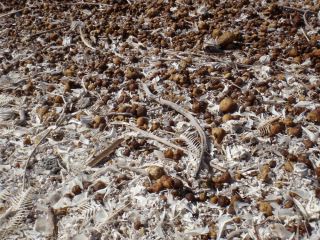 A fascinating and foul discovery on the skeleton-clad shores recently revealed the fate of the rest of the fish remains. Their flesh drops to the lake floor, where anaerobic bacteria transforms it into adipocere, also known as corpse wax, researchers from Kutztown University in Pennsylvania reported here Monday (Oct. 28) at the Geological Society of America's annual meeting.

Perhaps disturbed by fierce winds, globs of decomposed fish flesh recently rose from deep in the Salton Sea, coagulated into spheres on the lake surface and surfed the waves to shore, leaving the high-water line littered with thousands of sticky fish balls.

"We had putty knives with us, and we had to scrape them off our boots. That adhesive property is fundamental to adipocere," said Kutztown sedimentologist Edward Simpson, a study co-author. [Gross Photos: Salton Sea Fish Balls]

The bone beds first brought Simpson out from Pennsylvania in 2010. The Salton Sea offers a modern analogue to fishy layers in New Jersey's Newark Basin, which were deposited in the Triassic period.

The fish balls, sized from kumquat to mandarin, appeared on a return visit in March 2013. "I had never seen them before, so I didn't understand what they were," Simpson told LiveScience's OurAmazingPlanet.

Crack one open, and there might be a delicate skull bone inside, but nothing big and poky. That ruled out poop pellets or pelican regurgitation as a possible source, he said. There were no hints of layers. Fresh fish balls were moist and malodorous, Simpson said, but older ones grew a dry, hard rind in the sun, like a cow patty.

Driven by a desire to solve the mystery of the foul spheres, the researchers sealed a bucket's worth in epoxy (which traps the smell) and shipped the balls back to Kutztown for testing.

A high-powered microscope found minerals like hematite and feldspar, just a hair's-width wide, trapped in the core, said Margariete Malenda, a Kutztown undergraduate who performed the microscope analysis. The minerals suggest the spheres got their start in lake bottom mud that was very low in oxygen. (Hematite is an iron oxide mineral that forms in low-oxygen environments.)

The sudden appearance of the decomposed flesh globes occurred remarkably close in time to the emergence of a spectacularly awful Salton Sea stench that wafted across Southern California in September 2012.

"We are trying to answer whether they are linked," Simpson said. "We're trying to figure out what the time frame is. We need to go back out there and see if more are being generated and if they are going to disappear."

"To me, something is fundamentally changing [in the Salton Sea] that's generating these adipocere," Simpson said. "I went back and looked at historic photos of the shoreline and didn't see them, and we dug trenches and didn't find any."

"It's amazing," Simpson said of the Salton Sea's smell during his 2013 trip. "It's evil. It was like licking down a car."

The greatest numbers of fish balls in 2013 showed up on the northern beaches, where wind-driven waves pushed the balls up to the high-water mark, said Elizabeth Heness, a collaborator who is now a graduate student at the University of Texas at El Paso.

The rotting fish balls are just the latest in a string of natural disasters to hit the inland lake, from pollution to massive fish and bird die-offs.

A canal breach created the Salton Sea in 1905. With no outlet and no water source except for farming run-off, the lake has been shrinking and growing saltier ever since. The water level is now less than 60 feet (18 meters) deep.

"This environmental catastrophe really shaped Southern California," Simpson said. "This should be in every environmental textbook."