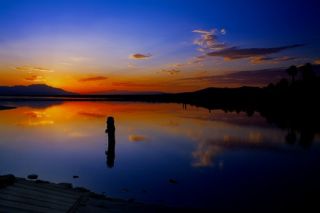 The Salton Sea is the largest lake in California. It's surrounded by bone-dry desert. So how did it come to be?
(Image: © Stephen Bures, Dreamstime)

The Salton Sea has been completely dry before, and news reports now say it's drying up again. In fact, there shouldn't be any water there now anyway.

The Salton Sea is not a sea at all. It is a lake in the heavily farmed Imperial Valley of Southern California. The salty sea is an odd, utterly huge expanse of water smack in the middle of the desert.

The Salton Sea is the largest lake in California, at some 375 square miles (970 square km).

Thing is, it didn't use to be there. Throughout geologic history, the basin has alternated between being a lake and a dry lakebed as the climate fluctuated over long time periods. Through modern history, it was bone dry.

So how did the Salton Sea form? It was all a big mistake.

In 1905, water from the Colorado River was diverted through the Alamo Canal to irrigate farmlands in the Imperial Valley, but huge precipitation and snow melt in the mountains that feed the Colorado sent a flood. The water broke through wooden gates in the canal and filled up the Salton basin, submerging most of the town of Salton.

The canal was fixed by 1907, but the Salton Sea had been created.

Now the lake gets replenished by irrigation runoff and "municipal and industrial drainage," according to the U.S. Geological Survey, so it is quite unnatural. Yet it has taken on a life of it's own. The nutrients in the runoff create algae blooms and there is abundant wildlife — lots of birds use it as a migratory stopover.

Water can't flow out of the Salton Sea, so it escapes only by evaporation, which leaves behind salts and other minerals. The water is 30 percent saltier than the Pacific Ocean. In fact, this man-made disaster of a lake has gotten so salty that scientists say it now threatens some of the birds that rely on it.