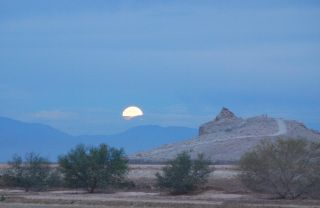 Moonset at Rock Hill, one of five volcanoes that comprise the Salton Buttes. The buttes last erupted between 940 and 0 B.C., not 30,000 years ago, as previously thought, a new study finds.
(Image: © U.S. Fish and Wildlife Service)

Earthquake swarms and a region-wide rotten egg smell recently reminded Southern California residents they live next to an active volcano field, tiny though it may be.

At the time, scientists said the phenomena did not reflect changes in the magma chamber below the Salton Sea. But now, researchers may need to revise estimates of the potential hazard posed by the Salton Buttes — five volcanoes at the lake's southern tip.

The buttes last erupted between 940 and 0 B.C., not 30,000 years ago, as previously thought, a new study detailed online Oct. 15 in the journal Geology reports. The new age — which makes these some of California's youngest volcanoes — pushes the volcanic quintuplets into active status. The California Volcano Observatory, launched in February by the U.S. Geological Survey (USGS), already lists the area as a high threat for future blasts.

"The USGS is starting to monitor all potentially active volcanoes in California, which includes the Salton Buttes," said study author Axel Schmitt, a geochronologist at the University of California, Los Angeles. "With our results, I think this will further enhance the need to look into the system," Schmitt told OurAmazingPlanet.

Schmitt and his colleagues dated zircon crystals in the hardened lava of the buttes with a relatively new technique, a "helium clock" that starts ticking once the minerals begin cooling at the surface.

The revised age solves a long-standing archeological conundrum, said Steve Shackley, emeritus professor of anthropology at the University of California, Berkeley. Artifacts created from one of the five buttes, Obsidian Butte, first appear in Native American villages around 510 B.C. to 640 B.C. The Kumeyaay people, whose territory ranged from the coast to the Coso Mountains, crafted projectiles from Obsidian Butte glass, he said. "The men produced some of the best in the world," Shackley told OurAmazingPlanet.

However, for decades, researchers thought Obsidian Butte erupted thousands of years earlier. To explain why no one collected the valuable obsidian, archeologists hypothesized that Obsidian Butte was submerged under ancient Lake Cahuilla, the precursor to today's Salton Sea. But geologists had long proved that Lake Cahuilla was ephemeral, flooding and emptying over and over again, so the explanation was always problematic.

"If this dating method is correct, then the Obsidian Butte material wasn't even available, and that makes more sense archaeologically," Shackley said.

In fact, that Obsidian Butte rises above the Salton Sea is what first attracted Schmitt's attention. A 30,000-year-old butte should have been buried by a combination of sediment and subsidence by now, he said. "It had to be very young," Schmitt said.

The buttes exist because California is tearing apart, forming new oceanic crust as magma wells up from below. The sinking Salton Trough is the landward extension of the Gulf of California, and marks the boundary between the Pacific and North America tectonic plates.

The lava source for the volcanoes is a magma chamberbeneath the Salton Sea, which also heats water for a nearby geothermal plant. Decay of uranium isotopes in zircon crystals show magma built up underneath the volcanoes for thousands of years before the latest eruption, the study shows. [50 Amazing Volcano Facts]

If another eruption occurs at the Salton Buttes, it will likely mimic past breakouts, Schmitt said. The volcanoes are made of sticky, slow-moving rhyolite lava. At Obsidian Butte, the lava cooled so quickly it turned into glass. However, pumice and ash found nearby means past breakouts started with a bang.

Schmitt said he hopes to study the area in more detail to better understand the most recent eruption. "The amounts of magma involved are relatively small and the impacts of an explosive eruption, meaning an ash cloud, would most likely be very local," he said. "We don't know very well how far any ash would have been dispersed, and that's something I would like to follow up on in the research."

"We'll be looking with great interest to see what we can tell from the Salton Seismic Imaging Project," said Joann Stock, a Caltech professor and an expert on the region's volcanic hazards who was not involved in the new study.

"I think [Schmitt's study] is a great contribution," she said. "It's an area where we should be concerned. We know that there's a lot of hot stuff down there," she told OurAmazingPlanet.

In August, an earthquake swarm shook the nearby town of Brawley. The USGS attributed the temblors to faults in the Brawley Seismic Zone. In September, a sulfurous stench emanated from the Salton Sea and wafted across the Inland Empire. The odor was tentatively linked to a fish die-off, but could also have been caused by volcanic gases, Stock said.