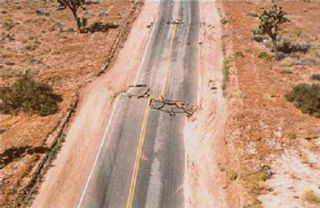 A "swarm" of earthquakes that touched off Sunday morning in southern California was still rolling along Monday afternoon, registering more than 300 small to moderate quakes that could be felt from Arizona to San Diego. The swarm is unusual but not as rare as you might think.

During an earthquake swarm, an affected area experiences a rapid-fire series of temblors that are all similarly proportioned, so that no one shock emerges as the obvious source of the rest. According to Julie Dutton, a geophysicist with the U.S. Geological Survey, diffuse clusters like these are far less common than earthquakes that arrive as one big shake followed by a series of smaller aftershocks.

Dutton estimates that the USGS records about 30 to 40 notable swarms a year, compared with 20,000 to 30,000 total earthquakes. Because swarms are rooted in the same kind of plate movements and stresses that cause more traditional quakes, she thinks that a large part of the phenomenon's apparent scarcity is based on semantics.

Swarms “are really hard to characterize," she told Life’s Little Mysteries. "It's all the same mechanisms. It's just a different way of finding equilibrium in the environment."

Where did the swarm start?

The current swarm originates just outside of the small farming town of Brawley, Calif., about 30 miles (45 km) north of the state's border with Mexico. According to Dutton, swarms with magnitude ranges close to the current one arrive in that area at the rate of one or two per decade, with the most recent one hitting in 2005.

The 2005 swarm, which topped out with a 5.1-magnitude event, was surpassed by yesterday's high of 5.5, the cut-off magnitude at which seismologists expect to start seeing casualties in developed countries, according to USGS geophysicist Paul Caruso. But there have been no reported injuries from the Brawley quakes, and Caruso said Monday morning saw a considerable slowing in the area's seismic activity.

The types of plate activity that might bring about a swarm as opposed to a concentrated quake are not yet well understood by scientists, and there's no way of knowing how long the current swarm will last (the 2005 swarm kept up for three weeks). But Dutton says there's no reason to believe that the Brawley swarm forebodes the arrival of a "big one."