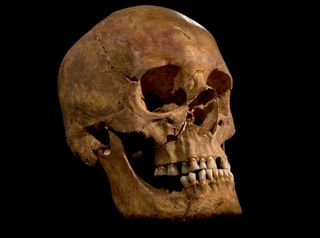 The skull of the skeleton found at the Grey Friars excavation in Leicester, identified as that of King Richard III.
(Image: © University of Leicester)

The recent discovery of the skeleton of King Richard III has the citizens of the city of York, where the king spent much of his life, celebrating the storied ruler — and feuding with the city of Leicester, where Richard III was buried and will be reinterred.

Now, a nearly 600-year-old manuscript on display at the Yorkshire Museum reveals York's attitudes toward the medieval king while he was still alive. This is the first time the manuscript has been on display for the public, according to The Northern Echo.

"I advyse you, as honourably as your wisdomes can imagyne, to ressayve hym and the quene at their commyng, dispose you to do as well pageants with soch good speches as can goodly, thys short warnyng considered, be devised," read instructions from the King's secretary contained in the York House Books manuscript. The orders came in August 1483, as Richard III and his lords travelled to York. [In Photos: The Search for King Richard III's Grave]

The secretary went on to suggest that residents hang banners and tapestries along the streets, before adding that he was sure the residents of York already had it covered.

"Me nedeth not thus to advise you, for I doubte not ye have provided therfore better than I can advyse you," he wrote.

According to the House Books and other documents highlighted by the Richard III: Rumour and Reality Festival, which is ongoing until June 2014, the king was indeed met with great fanfare. Upon his death at the Battle of Bosworth in 1485, the city grieved.

"'King Richard late mercifully reigning upon us was thrugh grete treason of the duc of Northefolk and many othre that turned ayenst hyme, with many othre lordes and nobilles of this north parties, was pitiously slane and murdred to the grete hevynesse of this citie," the York House bookkeeper recorded.

Even now, York rallies around Richard III, with a number of Richard enthusiasts arguing that the king's remains should be reburied in the northern city. After Richard III's death in battle, his body was taken to Leicester, where it was stuffed into a hasty grave. In 2012, University of Leicester archaeologists rediscovered the grave, with the king's battle-bruised skeleton inside.

A certificate from the U.K. Ministry of Justice gives the university the right to determine the king's final resting place, and the plan has long been to rebury Richard at Leicester Cathedral, near his original grave. A number of advocates have argued that York, as the place where Richard spent about a third of his life, has a stronger claim. One group even opposed the Leicester burial on human rights grounds.

Meanwhile, the Leicester Cathedral has released plans for a stately limestone coffin for the medieval king.