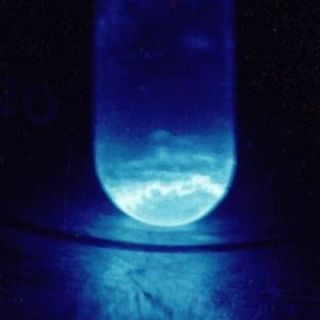 Einsteinium, the 99th element on the Periodic Table of Elements, is a synthetic element that is produced in extremely small amounts and with a very short lifetime. If the name seems familiar, it's because it is indeed named after famed physicist Albert Einstein, although he had nothing to do with the element's discovery or research.

Einsteinium was discovered during the examination of debris from the first hydrogen bomb test in November 1952, according to Chemicool. A team of scientists from the Lawrence Berkeley National Laboratory, the Argonne National Laboratory and the Los Alamos Scientific Laboratory and led by Albert Ghiorso, an American nuclear scientist at Berkeley, studied the debris collected by drones using chemical analysis. Minuscule amounts of einsteinium-253, an isotope of einsteinium, were discovered (less than 200 atoms, according to an article printed in Nature Chemistry by Joanne Redfern, a British science writer, in 2016). Fermium, the 100th element, was also discovered in the debris.

The results of the test were not published until 1955, according to Peter van der Krogt, a Dutch historian. At the time of the hydrogen bomb demonstration, tensions due to the Cold War were running high and many new discoveries were kept secret. Due to the method of creation and the nature of the new elements, further research of einsteinium continued in silence, according to the Los Alamos National Laboratory.

Further production and research on einsteinium, as well as fermium, was done at the Oak Ridge National Laboratory in Tennessee, according to Lenntech. The scientists created larger amounts of the element and also developed methods of purifying the einsteinium, as described in a 1978 paper by D.E. Ferguson and presented at a symposium. The paper describes the production of einsteinium and fermium in nuclear reactors by bombarding heavy elements such as uranium and curium with neutrons and having those products undergo radioactive decay. Einsteinium and the other heavy elements were then extracted from a tank filled with a solvent.

There is very little research involving einsteinium. According to Redfern, the main use of einsteinium is to create heavier elements, including mendelevium. Due to the high rate of decay and radioactive nature, there are currently no other uses for einsteinium.