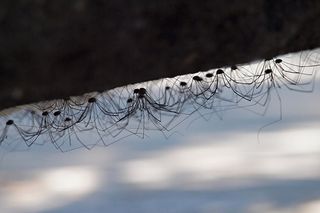 Daddy longlegs is a term used to refer to three different types of critters, and only one of them is a spider. A common belief is that daddy longlegs spiders are the most venomous spiders in the world. However, that is an urban myth.

The term “daddy longlegs” most properly refers to an arachnid in the order Opiliones, which are also called harvestmen, according to the department of entomology, soils, and plant science at Clemson University. This outdoor arachnid typically lives under logs or rocks. Unlike spiders, it has only one pill-like body segment. It also has only two eyes, does not spin webs, and is not venomous. Wisconsin Natural Resources magazine wrote that, like the spider, it has eight very long legs that can be 30 times as long as its body.

In the Southern United States as well as some parts of Canada and the United Kingdom, the crane fly is also sometimes called a daddy longlegs, according to The Burke Museum of Natural History and Culture. This distinctive bug, with six long legs and two large wings, is not a spider, nor an arachnid, but is an insect.

Another creature often called daddy longlegs is a spider in the family Pholcidae. The common name for these creatures used to be cellar spiders, but arachnologists have started to call them "daddy longlegs spiders" because of the common confusion, reported the department of entomology at the University of California, Riverside.

These daddy longlegs have two body segments — a cephalothorax and an unsegmented abdomen. Jo-Anne Nina Sewlal, an arachnologist at the University of the West Indies in Trinidad, described the abdomen as “very prominent” and “either round or oval shaped.” Like other spiders, these daddy longlegs have eight eyes, which Sewlal said are “arranged into a central pair and two clusters of three on either side of this pair.”

Daddy longlegs spiders range in color from cream to brown or gray, and according to SF Bay Wildlife, some species have brown stripes on the ventral side of their body. The daddy longlegs’ characteristic long, skinny legs are several times the length of its small body. Daddy longlegs spiders can range from 2 to 10 mm long, but their legs can grow up to 50 mm according to the entomology department at Pennsylvania State University. The female is slightly bigger than the male.

According to Sewlal, daddy longlegs’ long legs allow them to put less of their leg in contact with their web silk, making it less likely for them to become caught in their own web. She said this is the case for most web-weaving spiders, which have longer, slenderer legs than wandering, or ambushing spiders.

Daddy longlegs spiders live on every continent except Antarctica. They prefer damp climates but can nevertheless thrive in deserts. According to the department of entomology at the University of Kentucky, they are especially successful in urban areas where they spin thin, tangled webs in ceiling corners, under furniture, in garages, barns, attics, and basements, and other places where they’re unlikely to be disturbed. Daddy longlegs may be useful spiders because they can help keep the population of other insects and spiders down, according to the Queensland Museum.

The daddy longlegs spider’s web does not have adhesive properties for catching prey. According to BioKIDS, insects and other spiders get trapped in the confusing, irregular web structure. Then, the daddy longlegs covers the prey with silk and administers its fatal bite.

Sewlal described two fascinating defense mechanisms of daddy longlegs spiders. She said that some neotropical species engage in an action called “whirling.” She described it as when “the spider holds onto the underside of its web and swings its body in horizontal circles until it looks like a blur to the human eye. This is a defense mechanism and serves to make the spider appear bigger than it really is. This is particularly useful since they have visual predators such as birds, lizards and even other spiders like some species of jumping spiders.

“Another behavior that has a similar purpose is called ‘bobbing,’” said Sewlal. Again, the spider holds onto the underside of its web, and there it “repeatedly bends and straightens its legs like it is doing squats.”

Daddy longlegs spiders can mate throughout the year. According to the Natural History Museum of Los Angeles County, like most spiders, the male squirts sperm onto the web then sucks it up into his pedipalps, a pair of sensory appendages near the mouth. It then inserts the pedipalps into the female’s epigynum (external genital opening), and she carries the sperm around with her until she lays her eggs.

According to Clemson University, daddy longlegs spiders carry their egg sacs in their jaws at all times — with the exception of eating — until the eggs hatch. Then, the newly hatched babies crawl onto the mother’s body for a brief stretch of time. It takes about a year for the baby spiders to develop from egg to adult. Male daddy longlegs typically live for about one year and die after mating. Females can live for three years.

According to urban legend, daddy longlegs are the most venomous spiders in the world, but their fangs are too weak to penetrate human skin. However, this myth was busted on the Discovery Channel show "Mythbusters." A daddy longlegs spider was coaxed into biting the arm of the show's co-host, Adam Savage. He reported nothing more than a very mild burning sensation from the spider's venom that lasted just a few seconds.

According to the Australian Museum, the myth may have come about because the daddy longlegs spider can kill the dangerous Australian redback spider, but that is done through its ingenious web-catching technique, not its venom.

According to the Integrated Taxonomic Information System (ITIS), there are more than 80 genera of daddy longlegs spiders and about 1,000 species. The taxonomy of cellar spiders is:

The taxonomy of harvestmen, according to ITIS, is:

There are about 6,500 species of harvestmen.

There are three subfamilies, more than 500 genera and more than 15,000 species of crane fly.