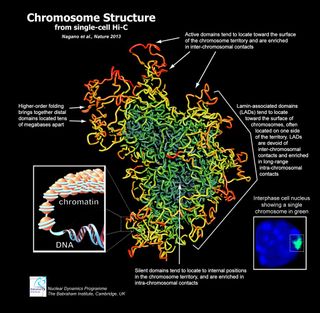 A series of molecular measurements, combined with a computer model, have revealed that chromosomes rarely take the shape of an X.
(Image: © Dr. Peret Fraser. Babraham Institute.)

Despite the images in countless textbooks, chromosomes look more like amoebas than X's, new research suggests.

A series of measurements combined with 3D computer models have revealed that chromosomes, the threadlike molecules of DNA and proteins that carry hereditary information, only fleetingly take the iconic X-shape, and most of the time are more complicated in shape.

"The image of a chromosome, an X-shaped blob of DNA, is familiar to many but this microscopic portrait of a chromosome actually shows a structure that occurs only transiently in cells — at a point when they are just about to divide," said study co-author Peter Fraser of the Babraham Institute in England, in a statement.

Once cell division is complete, the picture looks very different.

To see what chromosomes look like most of the time, Fraser and his colleagues took a series of microscopic measurements of chromosomes inside individual cells. They then combined these measurements and fed them into a complicated computer model to recreate a picture of the chromosomes.

Many of these structures look more like lumpy blobs than distinct X-shapes.

The findings could help researchers untangle how chromosome shape relates to gene function.

"These unique images not only show us the structure of the chromosome, but also the path of the DNA in it, allowing us to map specific genes and other important features. Using these 3D models, we have begun to unravel the basic principles of chromosome structure and its role in how our genome functions."