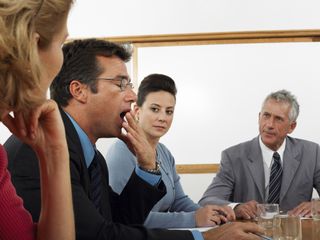 A number of hypotheses exist to explain why we yawn, but scientists have yet to come to a consensus about the phenomenon.

One of the most often-repeated explanations states that a yawn helps draw in large amounts of air to increase blood pressure, heart rate and blood oxygen levels. These physiological changes improve our motor function and alertness, helping to wake us up when we're tired or bored.

However, experiments have shown that yawning doesn't induce these changes.

A 2010 study published in the journal Neuroscience and Biobehavioral Reviews found evidence is also lacking for other physiology-based yawning explanations, including the arousal hypothesis, which suggests that yawning increases brain activity to keep us alert.

One idea that has gained traction over the last few years is based on the hyperthermia hypothesis, which holds that yawning helps cool down our brains. In 2007, researchers found that holding warm or cold packs on the forehead affected how often people yawned while watching videos of other people yawning — cold packs decreased yawning, compared with warm packs.

Adding further evidence to the hyperthermia hypothesis, research has also revealed that mice show increased brain temperatures before yawning and that people are more likely to yawn when the air is cool (while it seems counterintuitive, researchers explain that cold air maximizes yawning's cooling effect on the brain).

Some scientists think social, contagious yawning is related to mimicry and empathy. People often laugh when others laugh, smile when others smile and frown when others frown — the same is true for yawning.

Studies have suggested that people with high levels of empathy do tend to contagiously yawn more than other people, and that children with autism don't experience contagious yawning. Research has also shown that the closer someone is to you genetically or emotionally, the more likely you are to "catch" their yawn, probably because you have stronger empathetic bonds with them.