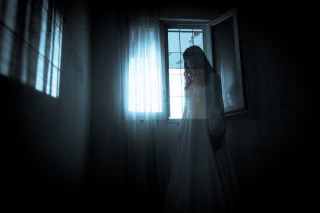 Have you ever been home alone and felt certain — certain — that someone was watching you? Afraid to turn around, lest you catch a ghostly visage out of the corner of your eye?

You aren't alone. In fact, for some people, this feeling translates into a full-blown phobia that makes it difficult or impossible to live or sleep alone. This fear of ghosts may be much more common than usually believed, said Ricardo de Oliveira-Souza, a psychiatrist at The D'Or Institute for Research and Education (IDOR) in Rio de Janeiro.

"It is possibly as common as the common phobias that we meet with every day, such as fear of heights or certain insects," Oliveira-Souza told Live Science.

Shame and embarrassment, according to Oliveira-Souza, probably prevent many people from mentioning their fears to medical professionals. Oliveira-Souza became interested in the phenomenon after a patient he treated for depression happened to mention that the depression treatment had also cured him of his lifelong fear of ghosts, which had once made him frightened to sleep alone. To Oliveira-Souza, the patient's description matched the criteria for a phobia, a term in psychology used to describe overwhelming fears triggered by a certain situation — in this case, being alone or thinking of horror movies or other supernatural scares. He began to ask around and found that many friends, patients and relatives also reported getting spooked by the notion of ghosts.

In a paper published in November 2018 in the journal Frontiers in Psychiatry, Oliveira-Souza highlighted a few of those cases. In one case, a 46-year-old hotel attendant who lived with her parents her whole life was bereft after her father died and her mother decided to move away; the woman was terrified to stay alone in the family apartment. When her mother left for a weekend trip before the planned move, the woman lurked in a nearby nightclub and wandered the streets of her neighborhood rather than face sleeping alone. Intrusive memories of her father's funeral haunted the woman when she did try to sleep.

In another case, a 54-year-old lawyer was hesitant to leave a bad marriage because he was afraid to live alone; he'd slept in the same room as his older brother as a youth and had married hastily after his brother left home because his supernatural fear made him terrified of sleeping alone. The lawyer reported that even when alone in his office, he felt like someone was watching him, or that something would materialize out of nowhere in front of him. This feeling of being watched is also known as "Anwesenheit," a German word that means "presence."

Being alone, especially at night, triggered fears for all of Oliveira-Souza's patients. One 19-year-old college student slept with her parents out of fears of spirits breaking through her bedroom window. A 63-year-old widow was so terrified that someone or something was in her living room at night that she sometimes wet the bed rather than get up and walk to the bathroom. An 11-year-old girl reported fears that hands would drag her under her bed if she dangled her legs over the floor or that a terrifying apparition would appear in front of her in the darkness.

The 11-year-old outgrew her fears after puberty, as many people do. Most of the adults, on the other hand, responded well to treatment with antidepressants or benzodiazepines, the most common drugs used to treat specific phobias.

"Regardless of the content of the phobic symptom in each case, these drugs relieve the anxiety that lies at the core of the dread," Oliveira-Souza explained.

Some patients were concurrently treated with cognitive behavioral therapy, a talk therapy method that works by untangling the specific fear (in this case, ghosts), from the physical and emotional experience of anxiety.

It's also likely that fear of ghosts occurs on a spectrum. A person without full-blown claustrophobia may still feel quite uncomfortable on a malfunctioning elevator after treatment, Oliveira-Souza said. In the same way, a person without a full supernatural phobia can still struggle to banish memories of horror films or Stephen King novels while alone on a dark and stormy night.