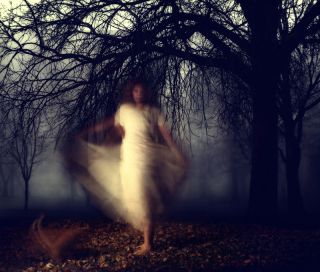 Do you believe in ghosts?
(Image: © Annette Shaff | shutterstock)

If you believe in ghosts, you're not alone. Cultures all around the world believe in spirits that survive death to live in another realm. In fact, ghosts are among the most widely believed of paranormal phenomenon: Millions of people are interested in ghosts, and a 2013 Harris Poll found that 43% of Americans believe in ghosts.

The idea that the dead remain with us in spirit is an ancient one, appearing in countless stories, from the Bible to "Macbeth." It even spawned a folklore genre: ghost stories. Belief in ghosts is part of a larger web of related paranormal beliefs, including near-death experience, life after death, and spirit communication. The belief offers many people comfort — who doesn't want to believe that our beloved but deceased family members aren't looking out for us, or with us in our times of need?

People have tried to (or claimed to) communicate with spirits for ages; in Victorian England, for example, it was fashionable for upper-crust ladies to hold séances in their parlors after tea and crumpets with friends. Ghost clubs dedicated to searching for ghostly evidence formed at prestigious universities, including Cambridge and Oxford, and in 1882 the most prominent organization, the Society for Psychical Research, was established. A woman named Eleanor Sidgwick was an investigator (and later president) of that group, and could be considered the original female ghostbuster. In America during the late 1800s, many psychic mediums claimed to speak to the dead — but were later exposed as frauds by skeptical investigators such as Harry Houdini.

It wasn't until recently that ghost hunting became a widespread interest around the world. Much of this is due to the hit Syfy cable TV series "Ghost Hunters," now in its second decade of not finding good evidence for ghosts. The show spawned dozens of spinoffs and imitators, and it's not hard to see why the show is so popular: the premise is that anyone can look for ghosts. The two original stars were ordinary guys (plumbers, in fact) who decided to look for evidence of spirits. Their message: You don't need to be an egghead scientist, or even have any training in science or investigation. All you need is some free time, a dark place, and maybe a few gadgets from an electronics store. If you look long enough any unexplained light or noise might be evidence of ghosts.

The science and logic of ghosts

One difficulty in scientifically evaluating ghosts is that a surprisingly wide variety of phenomena are attributed to ghosts, from a door closing on its own, to missing keys, to a cold area in a hallway, to a vision of a dead relative. When sociologists Dennis and Michele Waskul interviewed ghost experiencers for their 2016 book "Ghostly Encounters: The Hauntings of Everyday Life" (Temple University Press) they found that "many participants were not sure that they had encountered a ghost and remained uncertain that such phenomena were even possible, simply because they did not see something that approximated the conventional image of a 'ghost.' Instead, many of our respondents were simply convinced that they had experienced something uncanny — something inexplicable, extraordinary, mysterious, or eerie." Thus, many people who go on record as claiming to have had a ghostly experience didn't necessarily see anything that most people would recognize as a classic "ghost," and in fact they may have had completely different experiences whose only common factor is that it could not be readily explained.

Personal experience is one thing, but scientific evidence is another matter. Part of the difficulty in investigating ghosts is that there is not one universally agreed-upon definition of what a ghost is. Some believe that they are spirits of the dead who for whatever reason get "lost" on their way to The Other Side; others claim that ghosts are instead telepathic entities projected into the world from our minds.

Still others create their own special categories for different types of ghosts, such as poltergeists, residual hauntings, intelligent spirits and shadow people. Of course, it's all made up, like speculating on the different races of fairies or dragons: there are as many types of ghosts as you want there to be.

There are many contradictions inherent in ideas about ghosts. For example, are ghosts material or not? Either they can move through solid objects without disturbing them, or they can slam doors shut and throw objects across the room. According to logic and the laws of physics, it's one or the other. If ghosts are human souls, why do they appear clothed and with (presumably soulless) inanimate objects like hats, canes, and dresses — not to mention the many reports of ghost trains, cars and carriages?

If ghosts are the spirits of those whose deaths were unavenged, why are there unsolved murders, since ghosts are said to communicate with psychic mediums, and should be able to identify their killers for the police. And so on — just about any claim about ghosts raises logical reasons to doubt it.

Ghost hunters use many creative (and dubious) methods to detect the spirits' presences, often including psychics. Virtually all ghost hunters claim to be scientific, and most give that appearance because they use high-tech scientific equipment such as Geiger counters, Electromagnetic Field (EMF) detectors, ion detectors, infrared cameras and sensitive microphones. Yet none of this equipment has ever been shown to actually detect ghosts. For centuries, people believed that flames turned blue in the presence of ghosts. Today, few people accept that bit of lore, but it's likely that many of the signs taken as evidence by today's ghost hunters will be seen as just as wrong and antiquated centuries from now.

Other researchers claim that the reason ghosts haven't been proven to exist is that we simply don't have the right technology to find or detect the spirit world. But this, too, can't be correct: Either ghosts exist and appear in our ordinary physical world (and can therefore be detected and recorded in photographs, film, video and audio recordings), or they don't. If ghosts exist and can be scientifically detected or recorded, then we should find hard evidence of that — yet we don't. If ghosts exist but cannot be scientifically detected or recorded, then all the photos, videos, audio and other recordings claimed to be evidence of ghosts cannot be ghosts. With so many basic contradictory theories — and so little science brought to bear on the topic — it's not surprising that despite the efforts of thousands of ghost hunters on television and elsewhere for decades, not a single piece of hard evidence of ghosts has been found.

And, of course, with the recent development of "ghost apps" for smartphones, it's easier than ever to create seemingly spooky images and share them on social media, making separating fact from fiction even more difficult for ghost researchers.

Most people who believe in ghosts do so because of some personal experience; they grew up in a home where the existence of (friendly) spirits was taken for granted, for example, or they had some unnerving experience on a ghost tour or local haunt. However, many people believe that support for the existence of ghosts can be found in no less a hard science than modern physics. It is widely claimed that Albert Einstein suggested a scientific basis for the reality of ghosts, based on the First Law of Thermodynamics: if energy cannot be created or destroyed but only change form, what happens to our body's energy when we die? Could that somehow be manifested as a ghost?

It seems like a reasonable assumption — unless you understand basic physics. The answer is very simple, and not at all mysterious. After a person dies, the energy in his or her body goes where all organisms' energy goes after death: into the environment. The energy is released in the form of heat, and the body is transferred into the animals that eat us (i.e., wild animals if we are left unburied, or worms and bacteria if we are interred), and the plants that absorb us. There is no bodily "energy" that survives death to be detected with popular ghost-hunting devices.

While amateur ghost hunters like to imagine themselves on the cutting edge of ghost research, they are really engaging in what folklorists call ostension or legend tripping. It's basically a form of playacting in which people "act out" a legend, often involving ghosts or supernatural elements. In his book "Aliens, Ghosts, and Cults: Legends We Live" (University Press of Mississippi, 2003) folklorist Bill Ellis points out that ghost hunters themselves often take the search seriously and "venture out to challenge supernatural beings, confront them in consciously dramatized form, then return to safety. ... The stated purpose of such activities is not entertainment but a sincere effort to test and define boundaries of the 'real' world."

If ghosts are real, and are some sort of as-yet-unknown energy or entity, then their existence will (like all other scientific discoveries) be discovered and verified by scientists through controlled experiments — not by weekend ghost hunters wandering around abandoned houses in the dark late at night with cameras and flashlights.

In the end (and despite mountains of ambiguous photos, sounds, and videos) the evidence for ghosts is no better today than it was a year ago, a decade ago, or a century ago. There are two possible reasons for the failure of ghost hunters to find good evidence. The first is that ghosts don't exist, and that reports of ghosts can be explained by psychology, misperceptions, mistakes and hoaxes. The second option is that ghosts do exist, but that ghost hunters are simply incompetent and need to bring more science to the search.

Ultimately, ghost hunting is not about the evidence (if it was, the search would have been abandoned long ago). Instead, it's about having fun with friends, telling stories, and the enjoyment of pretending they are searching the edge of the unknown. After all, everyone loves a good ghost story.