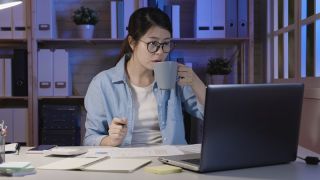 "Night owls" — people who naturally stay up late and wake up well past sunrise — have different patterns of brain activity compared with "morning larks," a new study finds. And these differences can make life more difficult for night owls, if they're forced to stick to a typical 9-to-5 schedule.

When the researchers scanned the brains of people who were classified as either night owls or morning larks, they found that night owls had lower "brain connectivity" — a measure of how "in sync" different brain regions are with each other — compared with morning larks.

What's more, this lower brain connectivity in night owls was linked with poorer attention, slower reaction times and increased sleepiness throughout the hours of a typical workday, the researchers said.

The findings suggest a possible reason why night owls may have problems with attention and sleepiness when they try to conform to a typical 9-to-5 schedule — something that doesn't match their internal clock, the researchers said. [5 Surprising Sleep Discoveries]

"This mismatch between a person's biological time and social time — which most of us have experienced in the form of jet lag — is a common issue for night owls trying to follow a normal working day," study lead author Elise Facer-Childs, of the Monash Institute for Cognitive and Clinical Neurosciences in Melbourne, Australia, said in a statement.

"Our study is the first to show a potential intrinsic neuronal mechanism behind why 'night owls' may face cognitive disadvantages when being forced to fit into these constraints," said Facer-Childs, who conducted the work while a researcher at the University of Birmingham's Centre for Human Brain Health in the United Kingdom.

The study is published Feb. 14 in the journal Sleep.

A growing body of research suggests that being a night owl could have negative effects on health, including the possibility of increasing a person's risk of early death. Many of these effects may be attributed to a misalignment between a person's internal clock, or circadian rhythm, and the socially imposed timing of work and other activities. But few studies have examined whether there is a link between circadian rhythm and people's brain connectivity.

The new study analyzed information from 38 healthy volunteers who filled out a sleep questionnaire to determine their "chronotype," that is, whether they were a night owl or morning lark. The participants also wore activity trackers and underwent tests to measure their levels of certain hormones in order to confirm their chronotype.

Then, participants had their brains scanned while in a "resting state," meaning they weren't doing any particular task and could let their mind wander. Brain connectivity in a resting state (sometimes known as the brain's "default mode network") is thought to be involved in a number of brain functions, including the maintenance of consciousness and self-reflection, as well as attention and memory, the researchers said.

Finally, the participants performed several tasks to measure their attention and reaction times at different times of day, from 8 a.m. to 8 p.m. Participants were also asked to rate how sleepy they were at those times.

Brain scans show that while in a resting state (not performing any specific task), morning larks had higher brain connectivity than night owls, and this predicted better performance and reaction times during the tasks, as well as reduced sleepiness. In contrast, the lower brain connectivity seen in night owls predicted worse performance, slower reaction times and increased sleepiness.

The researchers called for more studies to further explore how chronotype may affect brain connectivity.

The findings also suggest that society in general should be more conscious of how a person's internal clock affects their productivity and health.

"A typical day might last from 9 a.m. to 5 p.m., but for a night owl, this could result in diminished performance during the morning, lower brain connectivity … and increased daytime sleepiness," Facer-Childs said. "If, as a society, we could be more flexible about how we manage time, we could go a long way towards maximizing productivity and minimizing health risks."