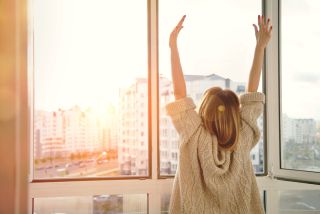 When your spouse falls asleep early while you're still looking to extend the evening, don't get too annoyed: Your partner may just be yielding to his or her body's innate clock.

Everyone has his or her own sleep chronotype, the personal biological clock that controls the body's rhythms and dictates whether people feel their best early in the morning, late at night or somewhere in between. And now, new research reveals that these sleep rhythms can vary by as many as 10 hours among individuals.

Sleepchronotypes also shift during people's lifetimes, according to the study, published Wednesday (June 21) in the journal PLOS One.

"I was surprised to see the large range of 10 hoursat all age groups," Dorothee Fischer, a research fellow at the Harvard T.H. Chan School of Public Health and leadauthor of the study, told Live Science."Extremely late and extremely early chronotypes exist at any age." [10 Things You Didn't Know About You]

In the study, the researchers wanted to analyze the distribution of sleep chronotypes among the U.S. population. The investigators looked at self-reported data that was gathered from 2003 to 2014 from nearly 54,000 respondents, ages 15 to 64, who participated in a government survey called the American Time Use Survey.

The researchers defined each person's chronotype by the midpoint of the individual's sleep session: the halfway point between the time he or she nods off and the time the person wakes up. So, for an 8-hour night of sleep, if a person falls asleep at midnight and wakes at 8 a.m., that individual's sleep chronotype would be 4 a.m.

The team used data only from the weekends, when school or work shifts were less likely to impose wake times.

As many might expect, later sleep chronotypes were most common among teenagers, peaking in17-to 19-year-olds, who had an average chronotype, or midpoint of sleep, of 4:30 a.m. For comparison, the average midpoint of sleep in 60-year-olds was 3 a.m. [5 Surprising Sleep Discoveries]

Men and women also showed some differences, the research found. Before age 40, men typically have later chronotypes than women, then after age 40, men's biological clocks shift earlier than women's.

That people's inner clocks range so widely, by up to 10 hours, creates "botha challenge and opportunity in a 24/7 society," the authors wrote. Currently, 30 percent of the U.S. workforce have jobs that involve nighttime hours, or rotating or extended shifts, according to data from the 2010 National Health Interview Survey.

When people are scheduled to work during hours when they would normally be sleeping according to their biological clocks, their health can suffer. Working in shifts outside of normal hours has been linked to increased risks of obesity, diabetes, cancer, heart disease and even decline in brain function. Altering shift times to accommodate natural sleep patterns could benefit both employers and employees, Fisher said.

"Flexible working-time arrangements with core work hours can accommodate different chronotypes, maintain productivity and foster teamwork while increasing the period of [time] employees [are] present in the office," she told Live Science. "Earlier employees may prefer to start at 7 [a.m.], while later ones may like to start at 10 [a.m.], essentially staffing the time between 7 a.m. and 6 p.m."

As for naturally late-rising teenagers, Fischer said there is a solution: Push school start times an hour or two later.