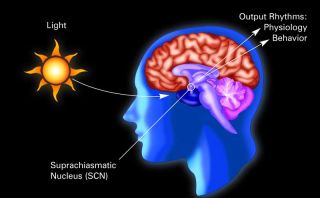 Even when we're not at work, we're on the clock — our biological clock, that is.

A system of biological clocks controls the daily, or circadian, rhythms of the body. These roughly 24-hour cycles of physical, mental and behavioral changes are found in most organisms, from humans to fruit flies, plants and even tiny microbes. Circadian rhythms determine sleep patterns, contribute to jet lag and are responsible for the groggy feeling you may experience after "springing ahead" for daylight saving time this coming weekend. Research supported by the National Institutes of Health has shown that circadian rhythms also influence hormone production, hunger, cell regeneration and body temperature and are associated with obesity, depression and seasonal affective disorder.

What makes them tick?

Biological clocks aren't made of cogs and wheels, but rather groups of interacting molecules in cells throughout the body. A "master clock" keeps everything in synch. In vertebrates, including people, the master clock is located in the brain. Ours lies within the hypothalamus in a group of nerve cells called the suprachiasmatic nucleus or SCN.

The body's clocks are partially driven by internal factors, including numerous genes and the proteins they produce. In 2006, researchers at the University of California, Irvine, discovered that a protein aptly named CLOCK is an essential component in directing circadian rhythms in humans, fruit flies, mice, fungi and other organisms. Counterbalancing CLOCK is a metabolic protein called SIRT1, which senses energy use in cells. Upsets in the CLOCK-SIRT1 equilibrium can lead to sleep disruption and increased hunger. If the proteins remain chronically unbalanced, it can contribute to obesity.

Biological clocks are also affected by signals from the environment — primarily light and darkness. The SCN is located just above the optic nerves, which relay information from the eyes to the brain, so it is ideally positioned to receive information about the amount of incoming light. When there is less light, such as after sunset, the SCN directs the brain to produce more melatonin, a hormone that makes you sleepy. In this way, the master clock directs our sleep-wake cycles.

Circadian rhythms are perhaps most famously implicated in jet lag, when passing through multiple time zones offsets your body's clock from that of your wristwatch. "Losing" or "gaining" time during air travel can leave your body feeling disoriented, especially if it is expecting daylight when it is actually dark, or vice versa. Eventually your body is able to adjust its circadian rhythms to the new environment. But return travel will disrupt it again, requiring another reset.

For instance, researchers at the University of North Carolina-Chapel Hill measured the activity of DNA repair systems at various times of the day in mice and found that they were most active in the afternoon and evening. Because some cancer drugs target DNA repair systems, the drugs might be more effective if given earlier in the day, when the body is less active in repairing damaged cancer cells.

Also, examining the interaction of metabolic proteins involved in circadian rhythms, such as CLOCK and SIRT1, could lead to the development of drugs aimed at obesity and diabetes.