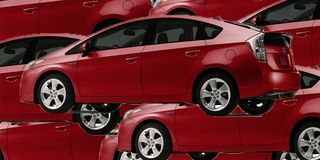 Dan Becker directs the Safe Climate Campaign, where James Gerstenzang, a former environmental reporter for the Los Angeles Times, is the editorial director. This piece is adapted from one that originally appeared in USA Today. The authors contributed this article to LiveScience's Expert Voices: Op-Ed & Insights.

The auto companies have a serious case of Priusenvy. Just look at how they seek to sell their cars.

They tout "efficient" models, making "best in class" claims, shouting "ecoconscious" and how gently the cars treat the environment. You'd think all they were selling was the Prius. Unfortunately, when it comes to fuel efficiency and emissions, few come close to the Toyota hybrid.

As 2014 models arrive in showrooms, the integrity of the car makers' pitch is about more than truth in advertising or savings at the pump. It goes to the heart of the Obama administration's programto fight global warming.

Under the plan's 54.5 miles-per-gallon standard, the fleet of new cars sold in the United States in 2025 is slated to nearly double gas mileage and halve carbon dioxide emissions, the major cause of climate change. Despite loopholes that, for example, allow the companies to make no improvements in the biggest pickup trucks' mileage through 2021, the rules are already cutting oil use and global-warming-linked pollution .

The auto industry's adherence to the rules is crucial: The less we guzzle, the less we pollute. The industry must also make cars that live up to the claims. When the claims are inflated, the federal government must step in, forcing the companies to stop misleading consumers.

How do companies mislead us?

Other than the Prius — 2012's top-selling car in California — most clean vehicles that companies push are built in minuscule numbers. During this year's first eight-and-a-half months, Chevrolet built about 20,000 plug-in electric-gas Volts and Nissan built fewer than 15,000 all-electric Leafs, Automotive News reports.

The production of such vehicles pales compared with General Motors' gas-guzzling pickups: Nearly 511,000 Silverados and Sierras, to name just two, were produced from January through mid-August. Their best mileage? Merely 21 mpg in combined city-highway driving — and that is for their rare hybrid versions.

The success of President Obama's green program depends on how closely the auto industry sticks to the spirit, as well as the letter, of the rules it negotiated with the administration.

The car makers need to act responsibly, making efficient vehicles that slash oil use and global warming pollution while cutting costs at the pump. That's how they can pay back the American people for the $82 billion bailout that saved their tailpipes.

The Federal Trade Commission is responsible for making sure that consumers aren't bamboozled by false advertising. The government must enforce the strong clean-car and truth-in-advertising rules.

If government and industry each does its job, consumers won't drive off dealers' lots in what they think are gas-sippers, only to guzzle and pollute.

The views expressed are those of the authors and do not necessarily reflect the views of the publisher. This version of the article was originally published on Live Science.