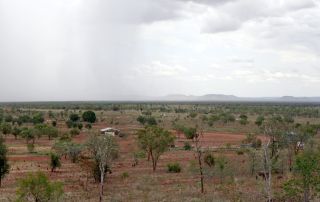 Beep, beep! There's more camouflage for sneaky roadrunners and wily coyotes in the deserts thanks to rising carbon dioxide levels in the atmosphere, a new study finds.

Between 1982 and 2010, leaf cover on plants rose by 11 percent in arid areas, including the southwestern United States, Australia's Outback, the Middle East and some parts of Africa, the study found. The results were published May 15 in the journal Geophysical Research Letters.

The research confirms a long-held suspicion that one of the side effects of global warming will be lusher plant life. Plants pull carbon dioxide from the air — the gas is part of a chemical process called photosynthesis that plants use to make food. More carbon dioxide should lead to an average increase in vegetation across the globe, which studies have found in recent decades. But increased rainfall or changing temperatures could also be responsible for the new growth.

To weed out these bedeviling effects, researchers in Australia looked at desert plants, where carbon dioxide is expected to have the biggest impact on plants. The team adjusted for the shifts caused byprecipitation, air temperature, sunlight and land-use changes.

First, the researchers created a computer model that predicted carbon dioxide's "fertilization effect" on plants. The model estimated that plant foliage would increase by 5 to 10 percent during the 30-year study period. Atmospheric carbon dioxide rose 14 percent in this time.

With satellite imagery, the team tested their model against real-world changes between 1982 and 2010. The model proved a good match to the greener plants, yielding strong support for the hypothesis that carbon dioxide is driving plant growth, the researchers said.

But increasing carbon dioxide levels may do more than add more leaves to plants, lead study author Randall Donohue of the Commonwealth Scientific and Industrial Research Organization in Canberra said in a statement.

The carbon dioxide fertilization effect could shift the types of vegetation that dominate arid regions, he said. "Trees are reinvading grasslands, and this could quite possibly be related to the carbon dioxide effect," Donohue said. "Long lived woody plants are deep rooted and are likely to benefit more than grasses from an increase in carbon dioxide."

Even though a bump in carbon dioxide can boost plant growth, the climate changes that come with growing concentrations of the greenhouse gas have caused concern. For example, plants also need the right amount of moisture, and changing rainfall patterns sparked by global warming could counteract the positive effects of additional carbon dioxide.

"The effect of higher carbon dioxide levels on plant function is an important process that needs greater consideration," Donohue said.