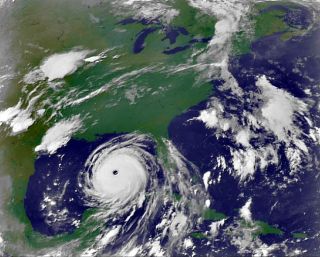 The busiest hurricane season on record brought the most intense Atlantic storm ever recorded and ran several days beyond its official Nov. 30 end, while scientists provided the first solid evidence that global warming might be fueling more powerful storms. These were all big stories in and of themselves, yet none will stick with us like the memory of Katrina, the most destructive storm ever to strike the United States and a long-predicted nightmare for resident of New Orleans. Nature's wrath forced scientists and officials to assess preparedness for other dramatic natural threats the country could face.

The formation of tropical storm Epsilon far out in the Atlantic Tuesday is a fitting bookend to the busiest hurricane season ever recorded.

This season, which began June 1, started out as the busiest on record, with 4 named storms by July 5.

It soon got worse.

Hurricanes Katrina and Rita were the most devastating highlights. Katrina has been called the most destructive U.S. storm ever.

Epsilon, No. 26 for those keeping track, is destined to head northeast and die over open water. But it is a rare storm, forming in the final moments of the season, which officially ends Nov. 30. The rarity only adds to what was by all accounts an unusual year.

And now the bad news: This year was part of a natural active cycle that began in 1995 and is expected to continue. Even worse, storm intensity may be increasing due to global warming, some scientists believe. And warmer seas may also be fueling more of the major hurricanes.

"Arguably, it was the most devastating hurricane season the country has experienced in modern times,” said Conrad C. Lautenbacher, Jr., the administrator of NOAA, the parent organization to the National Weather Service and the National Hurricane Center. “I’d like to foretell that next year will be calmer, but I can’t. Historical trends say the atmosphere patterns and water temperatures are likely to force another active season upon us.”

Long term conditions such as warmer-than-average sea-surface temperatures and low wind shear in the upper atmosphere are among the factors expected to fuel activity in coming years, forecasters say.

"Evidence of this active cycle was demonstrated this year as the Atlantic Basin produced the equivalent of more than two entire hurricane seasons over the course of one," David L. Johnson, director of the National Weather Service. "Because we are in an active hurricane era, it's important to recognize that with a greater number of hurricanes comes increasing odds of one striking land."

This year was so busy the Hurricane Center ran out of names and had to switch to the Greek alphabet for the first time. A handful of letters are not used in the regular list of 21 names.

Hurricane Wilma, which exhausted the standard list of 21 names, set its own record. It was briefly the strongest hurricane ever recorded.