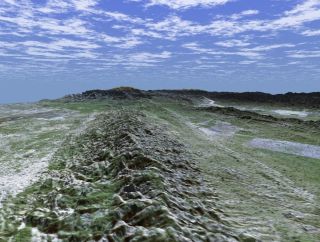 A bird's-eye view of the San Andreas fault where it cuts along the base of the appropriately-named Temblor Range near Bakersfield, Calif. The San Andreas is the linear feature to the right of the mountains. To the right of the fault is the Carrizo Plain. This image was made with data collected by the Shuttle Radar Topography Mission, which flew on a Shuttle mission in February 2000.
(Image: © NASA/JPL/NIMA)

The slope of a hill can reveal details about the heaving earth underneath, researchers say.

These findings also suggest hills might one day even have the chance to reveal details about distant alien worlds, scientists added.

The concept of linking the shape of hills to any tectonic activity reshaping the landscape has been around for at least a couple of decades, explained researcher Martin Hurst, a geomorphologist at the British Geological Survey. However, until now, it was difficult to measure the shape of hills in enough detail to recognize which features might be an effect of erosion driven by tectonic activity.

Hurst and his colleagues focused on an especially active ridge known as Dragon's Back Pressure Ridge located along the San Andreas Fault in California. They analyzed how the landscape there rose and fell using an airplane equipped with a laser scanner, which gathered high-resolution topographic data of this region. [Image Gallery: This Millennium's Destructive Earthquakes]

The researchers discovered that subtle features regarding the shape of the hills along that ridge are directly related to the processes that forced them up and out of the earth. For instance, a hill's slope and the curvature of its top reflected the level of vertical shift in the area caused by tectonic activity previously measured along the fault.

Based on their data, the scientists developed a computer model showing how changes to a hilltop's curvature lagged behind changes to the hill's slope due to erosion. This allows researchers to distinguish growing landscapes from decaying ones, and thus ascertain how much tectonic activity might be going on underneath.

"The results highlight the potential for hillslopes to not only give an indication of how a landscape may be evolving now, but may also reveal the history of change a landscape has experienced," Hurst said.

These findings suggest that studying the features of hills could infer what tectonic activity might be like on Earth and beyond, the researchers say. However, "our techniques are reliant on hillslopes being covered in soil or made up of loose material, which will limit application on Earth, let alone other planets," Hurst cautioned.

In addition, the ability to deduce how geologically active a landscape is could help identify zones with a high risk of landslides.

"Our results suggest that we can identify growing landscapes, which may be more prone to landslide activity," Hurst said. "In particular, it is worth noting that landslides and earthquakes are linked — for example, the 2008 Wenchuan earthquake caused thousands of landslides, despite being in a region having little historical seismicity. So being able to identify tectonically active landscapes is an important step in assessing landslide hazard."

"We're keen to further test the techniques in other locations where there is some knowledge of tectonic uplift," Hurst said. Such regions might include the margin of the Tibetan Plateau, where such research could shed light on past seismic activity.

The scientists detailed their findings in the Aug. 23 issue of the journal Science.