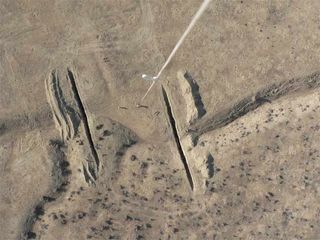 Recently, Ramón Arrowsmith was part of a team of researchers studying stream-channel offsets along the San Andreas Fault, the most comprehensive analysis to date of the extremely active Carrizo Plain section of the San Andreas Fault system. The project revealed new information about fault behavior and changed scientists' understanding of the fault's potential for producing damaging earthquakes. Growing up in New Mexico, Arrowsmith gained a strong sense of the geologic beauty and fascinating cultural intersections of the southwestern U.S.  Arrowsmith graduated from the Albuquerque Academy and satisfied his "California dreamin'" by attending Whittier College (southeast Los Angeles area). He went to Stanford University for his Ph.D. in Geological and Environmental Sciences. Arrowsmith felt his first earthquake in the 1987 Whittier Narrows event, and he felt his second major earthquake in the 1989 Loma Prieta event, which disrupted the World Series in Oakland. He studied the interactions between faulting and surface processes in the sculpting of the landscape and felt numerous large aftershocks of the Landers earthquake in 1992, as he studied its surface rupture. Arrowsmith also became obsessed with the San Andreas Fault in south-central California, in particular the Carrizo Plain. His colleagues at Arizona State University overlooked his youthful cluelessness and hired him as an assistant professor in 1995. Arrowsmith has been there ever since, enjoying teaching, research, and the sun. His interests in faulting, earthquakes and geology in general have taken him to central Asia, East Africa, India, the southwestern United States, Baja California Peninsula and New Zealand, as well as into the computer to analyze faults and high-resolution topography. Arrowsmith's wife is a volcanology professor and they particularly love cats. Read more about Arrowsmith's recent discovery here, and read his responses to the ScienceLvies 10 Questions below.

What inspired you to choose this field of study? When I was growing up in New Mexico, I really appreciated the landscape of the state. My dad and I used to often go fishing in the Jemez Mountains, which it turns out are part of a really interesting volcanic complex called the Valles Caldera. We used to talk about what I would do for a profession, and he thought that I would enjoy doing something useful that was outside. So, we used to talk about me becoming a forest ranger. As time passed and I moved into high school, my mother's inspiration as a public school history teacher drove me to think about history, and the long time I had spent taking Spanish in middle and high school pushed me towards the humanities. When I went to college (Whittier College in southern California), it seemed that I would major in history and Spanish. But, I did not really know what I should do, and I was having fun. It was that spring of my freshman year when I decided to take a volcanology class. It was really interesting and the professor got my attention and made me work. The professors of the geology department encouraged me and challenged me. At the same time, I had joined a program in which I could design my own major. I needed to do something, and I thought that Geology and Spanish would have the required liberal arts breadth, would build on my established Spanish experience, and let me be part of the small but friendly and challenging community of the College's Geology Department. I never looked back. It was (and is still) just so consuming. My undergraduate mentor (Dallas Rhodes) is a geomorphologist. We have worked closely together and thought long and hard about fun topics and places, like the landscapes of strike-slip fault zones and the Carrizo Plain in California. His expertise, as well as the College's well-known and incredibly valuable Fairchild Aerial Photography Collection, and the tectonically dominated landscape of southern California, drew my attention to studying the interaction of tectonic and surface processes.

What is the best piece of advice you ever received? There have been many very important pieces of advice, but the one that comes to mind was given to me when I went to graduate school: A couple of people told me to stay on the good side of the folks who ran the department office.

What was your first scientific experiment as a child? I used to dig a lot of holes in the pen of my family's dog. These were really more engineering now that I think of it than scientific.

What is your favorite thing about being a scientist? I receive a lot of satisfaction about the sense of place, process and time that I get from thinking about physical reality as a natural scientist. It provides this amazing context for anything that we do. I love the system-level thinking that is involved. It is sobering and wonderful at the same time to have a sense of the great spatial scale of processes—and the fine scale at which they are critically controlled—that dictate how the lithosphere, hydrosphere, atmosphere and biosphere interact. The great span of time that we can try to comprehend, manifest by geologic processes, gives me a sense of the shortness of human experience. But I don't want to sound like we are infinitesimal; we live rich lives of great depth in this short time. There is also the chance to look at a rock or a landform or a deposit and say "where have you been?" "What environment formed you?" This can be an igneous rock that formed from a melt, or it can be an interesting piece of stratigraphy that shows some fine lamination reflecting low energy muddy flow that then settled, dried, and might have been broken by an earthquake sometime later.

What is the most important characteristic a scientist must demonstrate in order to be an effective scientist? Remember that actions speak louder than words. We have to try our best to do what we believe to be important, like being open minded and letting the science and models speak for themselves and also being open with our own ideas and data. Professional lives are too short to not be generous and open.

What are the societal benefits of your research? My research and teaching emphasize understanding the processes in which faults slip and the landscape is sculpted. Such understanding is applied to natural hazards such as earthquakes, landslides and flooding. Studies of active deformation of the earth's crust use the tools of structural geology (to answer the questions related to the geometry and causes of deformation) and those of geomorphology (to further constrain geometry and rates of deformation). The geomorphic investigations also emphasize the interactions between humans and their environment, especially in the context of urbanization.

Most practically, the work that my students, collaborators and I have done in terms of characterizing the recent earthquake history of the south-central San Andreas Fault has had the most impact. These results, though just small parts of a big puzzle, directly influence thinking about, and the calculation of, next-generation earthquake forecasts for California.

Who has had the most influence on your thinking as a researcher? While many have inspired and challenged me, the one person who most changed me and set my thinking toward how I aspire to do science, was my esteemed Ph.D. advisor David D. Pollard of Stanford University. Dave was incredibly generous with us students, but also very clear on how he thought science should be done and what he thought was really worthy of respect. He talked a lot about the difference between the study of natural history and physical science. He basically thought of the two as inductive versus deductive, respectively, and that the latter was the path that had lead the great scientists of the past to the understanding which we now use. It took a long time to get that we really care about studying processes and not places, and that simply ones' understanding the minimum required to characterize something was an effective approach. But, that meant there was a lot of room for detailed field observations that would inspire us to think of new models and test our existing ones. Dave was an incredibly patient advisor to me and my fellow students. As a busy faculty member now, I strive to emulate his example. I am amazed to recollect how many times I just "dropped by" to discuss and he gently nudged and prodded me to stay on track, while being encouraging all the time. He also easily identified and discouraged fuzzy thinking. You knew you were in trouble when he would say, "I think you lost me there."

What about your field or being a scientist do you think would surprise people the most? I think people would be surprised by how varied the questions, tools and applications of the work we do can be. On one hand, people might think we only study rocks in a classic field geologist's manner (which is something I enjoy), but we also use lots of different kinds of data and work with many collaborators to characterize topography and deformation over different time scales. For example, for the last five years or so, I have been really immersed in using high-resolution topography as measured by GPS-located and inertial-navigation oriented laser scanners mounted in aircraft. These data are really intense in terms of their density and challenges to handle, but the quantitative depiction of the earth's surface—which I used to spend days surveying manually with friends and colleagues—can be measured in seconds and is now quite accessible and amazingly detailed. The technique characterizes features at the scale at which they form and the causative processes tend to operate. The results of our studies satisfy fundamental curiosity about how the earth works, but the results are also very useful for improving how humans interact with the earth. Investments in earth-science knowledge can save many more lives and human infrastructure, safeguard the environment, and provide more meaning about the wonders of the earth.

If you could only rescue one thing from your burning office or lab, what would it be? Well, there are lots of notebooks and slide collections and nice books that should be saved, but I guess I would just grab that cowboy hat that has shielded me as I worked over the years, and head out into the Arizona sun.

What music do you play most often in your lab or car? Right now I am listening non-stop to David Guetta thanks to my wife turning me on to his cool music and talented collaborators. If I have to write or really concentrate, then it is the Mozart Last.FM station.