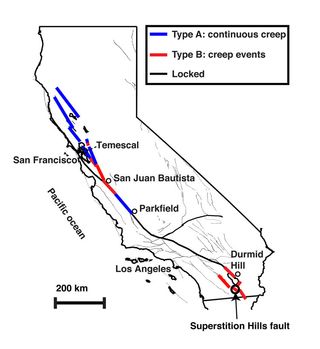 Along the San Andreas Fault between San Juan Bautista and Parkfield in central California, scientists issue no dire warnings of future bridge-collapsing earthquakes. This section of the 800-mile-long (1,300 kilometers) fault produces no strong earthquakes at all.

Instead of sticking and locking together and breaking in occasional big temblors, the fault creeps, steadily releasing strain through thousands of tiny microquakes. One of the big puzzles in geology is understanding why faults like the San Andreas creep, and how the process links to large earthquakes elsewhere on the fault.

A new computer model finds that creep starts shallowly — about 3,200 feet (1 km) below Earth's surface — on strike-slip faults such as the San Andreas Fault. Earlier models — based, in part, on rock lab studies — had suggested the creeping zone was deeper, between 1.8 to 3 miles deep (3 to 5 km).

The model requires a new, "conditionally unstable" zone in the sediments at the top of the fault. No regular earthquakes can strike in this zone, but the fault can slowly crawl. In the San Andreas Fault's San Juan Bautista creeping section, this zone is about 985 feet (300 m) thick, according to the model. On the Superstition Hills Fault, the zone is about 3,200 feet (1 km) thick. But both creeping zones are at the same depth, around 3,200 feet (1 km) below the surface.

The researchers said the results are an important step in ground-truthing mechanical fault models."Creep is a basic feature of how faults work that we now understand better," Jeff McGuire, study co-author and a researcher at the Woods Hole Oceanographic Institution in Massachusetts, said in a statement.