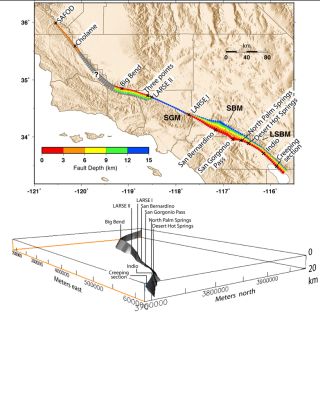 Last October more than 8.6 million Californians practiced the "Drop, Cover and Hold On" drill in the Great California ShakeOut. The exercise was designed to help residents prepare for the next "big one," a potential magnitude-7.8 earthquake along the southern San Andreas Fault.

All of the Great ShakeOut scenarios are based on everything scientists think they know about the San Andreas Fault — a so-called strike-slip boundary between the North American and Pacific plates that, geologists assumed, is very near vertical.

But what if it's not vertical? A team recently took a new look at the San Andreas Fault and found that its geometry isn't that simple.

"It looks like the San Andreas continues down into the mantle with a propeller shape," said Gary Fuis, a geophysicist with the U.S. Geological Survey in Menlo Park, Calif. "If it's not vertical, it makes a big difference in who feels the shaking."

A propeller down below

Fuis and his team used seismic imaging and geophysical modeling to tease out the shape of the fault.

They found that, rather than the near-vertical strike-slip fault geologists thought they understood, the San Andreas has at least two segments that dip dramatically in opposite directions.

"Our models indicate that the fault actually goes into exaggerated dips," Fuis told OurAmazingPlanet. "It dips to the southwest south of Bakersfield, goes up to vertical through the northern San Gabriel Mountains, then flips over to dip northeast from San Bernardino all the way down to the Salton Sea."

Together, the two dipping segments give the fault a shape that resembles a propeller.

Why the earth contorted itself into this geometry is still unclear. Fuis and his team think the propeller shape may make it easier for the Pacific and North American plates to slide past each other, especially through some of the southern California mountain ranges, where the plate boundary is a bit crooked. But determining whether that's actually the case will require additional geophysical modeling, Fuis said.

The team's findings appear in the February issue of the Bulletin of the Seismological Society of America.

A whole lotta shakin' — in some places

Geologists do know that quakes on dipping faults cause the earth to shake very differently in different locations.

When an earthquake occurs on a fault that dips to the east, for example, cities to the east of the fault will generally feel much stronger shaking than cities to the west. The reason is simply that the eastern cities are much closer to the fault plane because it's dipping under them.

This differential shaking was apparent during the 1989 Loma Prieta earthquake in the San Francisco Bay Area, Fuis said. The quake shook Watsonville, a city south of the San Andreas Fault, nearly twice as hard as it shook San Jose, located north of the fault, even though the cities were equal distances from the epicenter.

Fuis believes that, as geologists uncover more dipping along the San Andreas and other faults around the globe, they'll be able to better predict the consequences of major earthquakes and improve drills like the Great California ShakeOut.

"There's a very strong prejudice out there that says when two pieces of earth move sideways past each other, the fault has to be vertical. Well, we've shown in Southern California that, no, it doesn't have to be vertical," Fuis said. "As we do more and more seismic imaging over strike-slip faults like the San Andreas, we're going to find all kinds of dips, and they'll very rarely be vertical. But this is just a start."