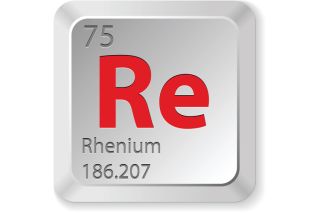 Discovery: Rhenium is generally considered to have been discovered by Walter Noddack, Ida Tacke and Otto Berg in Germany in 1925. They detected the element in platinum ore and columbite as well as in gadolinite and molybdenite.

Rhenium is a silvery white element with a metallic luster. It has a high density point exceeded only by platinum, iridium and osmium, and its melting point is exceeded only by tungsten and carbon.

The usual commercial form of the element is powder, but it can be consolidated by pressing and resistance-sintering in a vacuum or hydrogen atmosphere. Annealed rhenium can be bent, coiled, or rolled. [See Periodic Table of the Elements]

Commercial rhenium is obtained from molybdenum roaster-flue dusts found in copper-sulfide ores. However, rhenium does not occur freely in nature or as a compound in mineral ores. Molybdenum contains from 0.002 percent to 0.2 percent rhenium, and the element is found widely spread through the Earth’s crust. Rhenium metal is prepared by reducing ammonium perrhentate with hydrogen.

Rhenium had good wear resistance and can withstand corrosion. Therefore, it’s commonly used as an electrical contact material. Rhenium wire is used in flash photography. It is used in hydrogenation of fine chemicals and as an additive to tungsten and molybdenum-based alloys.