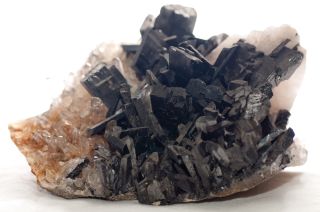 The element tungsten is found in the mineral wolframite.
(Image: © farbled | Shutterstock)

Tungsten is known as one of the toughest things found in nature. It is super dense and almost impossible to melt. Pure tungsten is a silver-white metal and when made into a fine powder can be combustible and can spontaneously ignite. Natural tungsten contains five stable isotopes and 21 other unstable isotopes.

Tungsten is used in many different ways because it is very strong and durable. It is very resistant to corrosion and has the highest melting point and highest tensile strength of any element. Its strength comes when it is made into compounds, though. Pure tungsten is very soft.

Here are the properties of tungsten, according to the Los Alamos National Laboratory:

The first use of tungsten was more than 350 years ago. Chinese porcelain makers used a tungsten pigment that was a unique peach color, according to the Royal Society of Chemistry.

Much later, in 1779, Peter Woulfe examined a mineral from Sweden and realized it contained a new type of metal, but that’s about as far as the research went. In 1781, Wilhelm Scheele continued the research on this new metal and isolated an acidic white oxide. Neither one of these men are credited with the element’s discovery, though.

Juan and Fausto Elhuyar get that honor. At the Seminary at Vergara in Spain, they researched this mysterious metal. In 1783 they isolated the metal oxide from wolframite and then, unlike the others, reduced it to tungsten metal by heating it with carbon.

Most tungsten resources are found in China, South Korea, Bolivia, Great Britain, Russia and Portugal, as well as in California and Colorado. Though it is found in these many places, 80 percent of world’s supply is controlled by China, according to the BBC.

The element naturally occurs in the minerals scheelite, wolframite, huebnertie and ferberite. It is harvested from the minerals by reducing tungsten oxide with hydrogen or carbon.

Once it is sourced, tungsten is often mixed into alloys. The hardest alloys are shaped using diamonds. Diamonds are the only things harder than some tungsten alloys.

One of the most common, and hardest, tungsten compounds is tungsten carbide. Because of its strength when made into compounds, tungsten is used to harden saw blades and make drill bits. It can take around 10 minutes to cut just one drill bit from tungsten using a diamond cutting system, according to the BBC. Some jewelers also use tungsten carbide to make wedding bands and other rings.

Another tungsten compound that is particularly useful is tungsten disulfide. It is used as a dry lubricant in temperatures as high as 932 degrees Fahrenheit (500 degrees Celsius), according to the Jefferson Lab.

Some other uses of tungsten include metal evaporation work, the manufacturing of paints, making glass-to-metal seals and creating electron and television tubes.

The military uses tungsten to make bullets and missiles used in “kinetic bombardment.” This type of attack uses a super dense material to breach armor instead of explosives.

Its resistance to heat is helpful when using it in the heating elements for electrical furnaces, spacecraft applications, welding and other high-temperature applications. It was also used in making different types of lighting for this reason. The hotter a filament can get without melting, the brighter the bulb. In 1908 inventor William D. Coolidge discovered that tungsten was an ideal filament material. Today, though, most bulbs use more energy efficient materials. It is still used in X-ray filaments and in electrical contacts of various electronics, however.

Biologically, some bacteria use tungsten to reduce carboxylic acids to aldehydes.

This element is used for trickery. “Tungsten may not have gold’s luster, but it does have its density (within 0.36 percent) which means that if you cover a brick of tungsten with a coating of gold – and you test the brick to see if it weighs as much as gold – it will be almost correct,” Amanda Simson, an assistant professor of chemical engineering at the University of New Haven, told Live Science. “Thus, tungsten has been found in counterfeit gold bricks.”

Tungsten's chemical symbol is a W, which may seem weird since there isn’t a W in the word. The W actually comes from the element’s other name, wolfram. The name wolfram comes from the mineral the element was discovered in, wolframite. Wolframite means "the devourer of tin," which is appropriate since the mineral interferes with the smelting of tin.

This article was updated on Feb. 3, 2020 to correct the boiling point of tungsten.