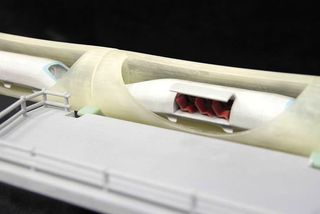 The SpaceX and Tesla Motors magnate unveiled details for the Hyperloop earlier this week. Designers at the 3D-printing company WhiteClouds built the desktop-size model in less than 24 hours.

WhiteClouds CEO Jerry Ropelato challenged a team of five designers to create the model. "I thought it would be fun and interesting to take what we do every day and make the Hyperloop concept into something real," Ropelato said in a statement. "This really demonstrates the possibilities 3D printing offers," said Ropelato, who is the former CEO and current board member of LiveScience parent company TechMedia Network.

Each designer worked on one part of the Hyperloop system, designing digital 3D models based on images released by Musk. The system involves passenger transport capsules (pods) that run through elevated tubes supported by pillars and a station for embarking and disembarking. [See Photos of the Futuristic Hyperloop System]

Three different 3D printers were used to build each part, layer by layer, from a computer aided design (CAD) model. WhiteClouds' Connex 500 printer was used to make the pillars, the ProJet 3500 HDMax was used to make the tubes (from a clear UV-cured resin), and the ZPrinter 650 cranked out the station platform and the pods (in full color, from a sandstonelike material). The team then assembled the various parts to make the complete system.

The real Hyperloop would travel at speeds of about 760 mph (1,220 km/h), ferrying passengers between Los Angeles and San Francisco in just 30 minutes (compared to about 5.5 hours by car). Using energy derived from the sun, the passenger pods would reach these speeds by traveling on a cushion of air.

Musk said the Hyperloop system would reduce intercity traffic congestion and provide a cheaper, greener means of transport than cars do. It would also be more cost-effective than the planned California High-Speed Rail project, the $70 billion system that would link most major cities in the state, he said.

For now, though, the Hyperloop remains a pipe dream.