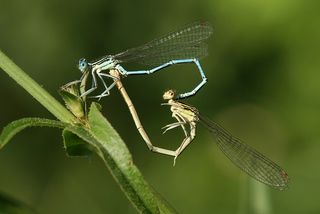 Male insects generally have gay sex by mistake: they can't tell the difference between a male and female until the act is done.
(Image: © Reddogs | Shutterstock)

Insect sex may seem fairly simple: fluttering dances, clasping abdomens, a quick mount on a forest floor. But a new review of homosexual insect encounters suggests the acts may not be that straightforward for the individuals involved.

Researchers have widely examined homosexual behavior in mammals and birds, but have addressed it less frequently in insects and spiders. To assess the range of evolutionary explanations for same-sex intercourse in the invertebrate world, a team of biologists from Tel Aviv University in Israel and the Swiss Federal Institute of Technology in Zurich, Switzerland examined roughly 100 existing studies on the topic and compiled the first comprehensive review of homosexuality in invertebrates. The review was published earlier this month in the journal Behavioral Ecology and Sociobiology.

The team focused on male-male interactions to simplify the analysis, and found that most of these encounters occurred as accidents. Whereas larger animals have developed more complicated homosexual motivations — like maintaining alliances, which has been found in certain primate and seagull species — insects seem to mistakenly partake in it in a hasty attempt to secure mates. [Gay Animals: Alternate Lifestyles in the Wild]

"They have evolved to mate quick and dirty," said study co-author Inon Scharf, an evolutionary ecologist at Tel Aviv University. "They grab every opportunity to mate that they have because, if they become slow, they may give up an opportunity to mate."

In some cases, males carry around the scent of females they have just mated with, sending confusing signals to other perusing males. In other cases, males and females look so similar to one another that males cannot tell if a potential mate is a female until he mounts "her" and prepares for the act, Scharf said.

Sometimes, such extreme indiscrimination leads to mating with inanimate objects, as has been observed in beetles trying to mount glass bottles.

The glass bottle "looks like a huge female to them," Scharf said. "They just try to mate with whatever gives them a vague impression of an opportunity."

Other studies do, however, show evidence of more intentional and malicious motivations behind homosexual insect sex. Male butterflies, moths and wasps, for example, use same-sex encounters to distract competitors from potential female mates. Certain beetles have even been found to use same-sex mounting as a way to spread sperm to other males that may then pass it along to the next female he mounts, though this mechanism does not appear to be very effective.

Since male insect anatomy is not designed to accept male genitals, improper penetration can cause bodily damage in aggressively competing mates. This anatomy blocker is not a problem for all species, since not all insect sex involves penetration. Even so, one study found that certain male insects have developed femalelike genitals to lower the risk of damage from homosexual penetration.

On the other hand, female-female homosexuality appears to have a separate set of motivations, and deserves a whole separate analysis, Scharf said. In general, female-female interactions seem more intentional than male-male interactions. In fact, one study found that certain female beetles mount each other to look larger and attract more male mates.

The frequency of homosexual behavior in the insect world also remains unclear; however, more cases have been observed in the lab than in the field. This could indicate that the behavior occurs during stressful or isolating conditions, Scharf said, but more work is needed to confirm this idea.

And while the possibility that any sort of sexual encounter could induce pleasure in insects may seem unlikely, Scharf does not rule it out.

"I don't know if they enjoy things or not, or if they feel fear," Scharf said. "They have some stress hormones — and they sense it — but whether you can define this as fear, pleasure or pain is very difficult to say."

The team next hopes to conduct experimental studies on a species of beetle to determine how homosexual behavior affects different aspects of the animal's life, and whether the behavior is linked to any other specific types of behaviors.