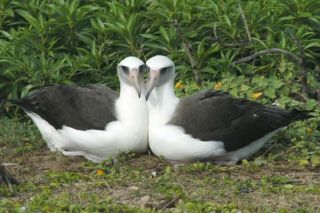 What happens when there is a shortage of males and a female wants to have a family?

In the case of the Laysan albatross, females shack up with each other for years and take turns raising offspring, research now reveals.

Such behavior might prove common not just with albatrosses, but many other seabirds as well, scientists added. Researchers have long known that same-sex couples are common in the wild kingdom.

These females "behave just like male-female pairs," said researcher Lindsay Young, a doctoral student studying behavioral ecology at the University of Hawaii. "If a male comes up to one female in the pair, the second female gets really possessive."

And partnered females groom each other, intimate behavior usually only seen between mated couples of males and females.

"If you attempt to groom another bird that you're not paired with, you're in for a nasty surprise," Young told LiveScience. They have not seen the females try and copulate with each other yet, however.

The researchers first noticed these pairings after seeing that about a sixth of all nests each had two eggs. Albatrosses normally only have one egg per nest. After looking at the genes of the birds — the only reliable way to tell sexes apart in these albatrosses — they found nests with two eggs had paired females.

As these albatrosses can only support one chick per year, in nests with two eggs — seen with about half of all the female-female pairs — one egg ultimately is lost.

"They both lay eggs, and the one that is closest to the brood patch — the area where all the feathers fall out on an incubating female, which has a lot of blood vessels to keep an egg warm — is the egg that survives," Young said. "It seems to be just luck of the draw which egg survived. It doesn't seem to be a dominance thing between the birds, or whether it was the first laid or the second laid. It just seems to be a matter of whichever egg made it into the sweet spot."

Overall, these same-sex parents raise fewer offspring than male-female pairs, but given the shortage of males, fewer chicks are better than none.

Since these albatrosses raise just one chick each year, female partners stay together for multiple years for each to reproduce.

"The longest we've seen them stay together so far is 19 years," Young said. "That's a pretty committed relationship."

Albatrosses are often regarded as icons of monogamy. Still, 10 of the 16 chicks that belonged to female–female partners were fathered by males that cheated on their female mates.

"These albatrosses do socially stay with the same partners for long periods of time. It's just that they don't always mate with their partners exclusively," Young said.

Same sex couples are common in the wild. According to University of Oslo zoologist Petter Böckman, roughly 1,500 animal species are known to practice same-sex coupling, including bears, gorillas, flamingos, owls, salmon and many others.

This same-sex strategy may explain why Laysan albatrosses are successfully at re-colonizing islands. Pairs of parents are essential to the survival of young albatrosses — one parent stays at home to incubate eggs and guard offspring, while the other flies and gets food.

"Although they nest in Hawaii, they forage near Alaska, up to thousands of miles away," Young said. "That's where their feeding grounds are — the cooler water tends to be more productive, and they go for small fish and a lot of squid."

This is the first time female–female pairing has been seen in albatrosses. But Young suspects they are far from unique. "A lot of albatrosses have been seen with two eggs in nests," she said. "And not just albatrosses, but other seabirds as well. This may be a lot more common than we realized, so the race is on to find out."

The same-sex situation seen at this one Laysan albatross colony might not extrapolate to the species as a whole, Young said.

"We're looking at a new colony that's trying to adjust to the availability of a certain sex, or lack thereof," she explained. "We want to compare multiple sites to figure out what kinds of forces are driving this behavior."

"The species as a whole is probably flexible in terms of mating strategies," Young added. "It's just that in other places, it may not be as prevalent."

Young and her colleagues Brenda Zaun and Eric VanderWerf detailed their findings online May 28 in the journal Biology Letters. They were funded by the Kilauea Point Natural History Association and the University of Hawaii Ecology, Evolution and Conservation Biology program research award through a National Science Foundation grant.