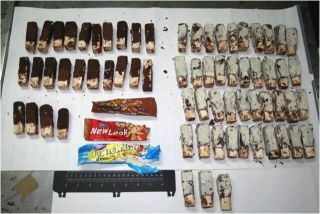 These elephant ivory seals were coated in chocolate and concealed in candy wrappers when they were recovered in Taiwan in December 2012. Smugglers from South Africa were caught in July 2013 trying to use a similar disguise to bring illegal ivory into Macau.
(Image: © © Huang MJIB, TW)

Further investigation and a little warm water revealed what was actually inside the candy bar wrappers. As the chocolate melted away, officials discovered 583 bars of ivory, all together weighing 75 lbs. (34 kilograms) with a market value of more than $76,000 U.S. dollars, according to the Macau Daily Times.

"Nothing shocks me anymore — especially at how far people will go to engage in illegal wildlife trade," Crawford Allan, director of TRAFFIC North America, said in a statement from the World Wildlife Fund (WWF).

"Luckily, officials detected the 'chocolate' ivory before the traffickers turned a profit," Allan added. "Unfortunately, these incidents are not isolated, and trade in illegal wildlife continues to be a major global problem."

Apparently, this chocolate disguise is not even that original. From September to December 2012, more than 90 ivory seals were found hidden in chocolate packages being sent from South Africa to Taiwan, according to WWF.

The Convention on International Trade in Endangered Species of Wild Fauna and Flora (CITES for short) banned the ivory trade in 1989, but a black market for elephant tusks still thrives, largely fueled by a demand in Asia.

Based on the amount of ivory seized worldwide in 2011, some researchers have estimated that up to 50,000 African elephants were killed that year for their tusks.