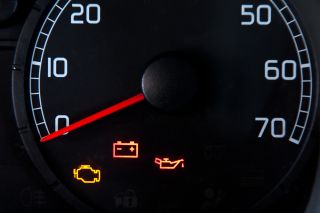 Can you identify each of these dashboard warning lights? Most drivers can't, according to a recent survey.
(Image: © Pabkov | Shutterstock.com)

If you're convinced that most drivers have no idea what they're doing behind the wheel, the following news will do nothing to shake that belief.

A new British survey reveals that 98 percent of drivers don't fully understand the most common dashboard warning lights, such as tire pressure, engine emission and fog-light indicators, according to the Independent Online.

But car manufacturers might shoulder some of the blame: The survey, commissioned by British automotive breakdown service Britannia Rescue, also found that some cars have a mind-numbing array of buzzers, lights and other warnings. The Mercedes-Benz E Class stands out for having a whopping 41 different dashboard lights, the Daily Mail reports.

"Cars have become so complex that the majority of drivers don't understand what all of the most common warning or information lights on a car dashboard mean," a Britannia Rescue spokesman told the Daily Mail.

"As in-car technology becomes more advanced, there are now more and more in-car gadgets with symbols that support everything from the car's [satellite navigation] system to its heating and cooling options," the spokesman said.

"The problem is being exacerbated by the fact that many warning-light symbols are specific to a manufacturer or even the individual model," he said. Indeed, of the 99 different dashboard lights identified in the study, just 12 of the lights were common across all vehicle models, making one car very different from another.

Not only does dashboard confusion have the potential to create hazardous conditions, but it also costs motorists heavily when they finally get around to having their car repaired. Motorists who got the issue fixed immediately paid an average of $129, while those who kept driving for 14 days paid $303 on average for repairs.

But most drivers simply kept driving, waiting an average of 12 days before getting a nagging dashboard light checked, the survey found.

"Dashboard warning lights are like alarm bells telling you something is wrong with your car and urgent action may be required, either to prevent damage to your car or for your safety," Peter Horton, managing director at Britannia Rescue, said in a statement.

"If a warning symbol lights up, you should stop in a safe place as soon as possible and check what the problem is," Horton said. "Keep your vehicle manual handy so that you can easily check what that symbol means as well as what action to take."