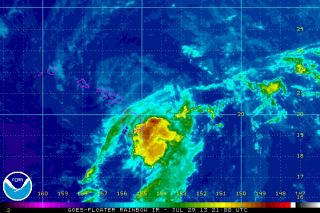 Though it may not seem like it to those living on the mainland, in the Hawaiian Islands, Pacific tropical storms are pretty common events, said Steve Businger, an atmospheric scientist at the University of Hawaii at Manoa. "There have been several in the 20 years I've lived here. They're not so terribly rare," Businger told LiveScience. (Tropical storms have winds between 39 and 65 mph [63 to 105 kph].)

It's hurricanes that are the rare bird in the region. Only four hurricanes (Iniki, Iwa, Dot and Nina) have caused major damage in Hawaii in the past 60 years, though four or five tropical cyclones (the blanket term for tropical storms and hurricanes) form in the central Pacific every year, according the National Weather Service's Central Pacific Hurricane Center. By comparison, the U.S. mainland sees about seven hurricanes make landfall every four years, according to the National Hurricane Center in Miami. Florida alone has been hit by four hurricane since 2010. (Hurricanes have winds of more than 74 mph [119 kph].)

In the central Pacific, hurricanes form just as they do in the Atlantic. Warm ocean waters near the equator push heat and moisture into the atmosphere, where strong winds force the rising air into a spiral. [50 Amazing Hurricane Facts]

In the Pacific Ocean, the prevailing tropical winds blow storms out to sea, away from the U.S. mainland and toward Hawaii. This is why the West Coast so rarely sees tropical storms make landfall. The Coriolis effect also helps aim hurricanes toward the islands by deflecting storms away from the equator. (The Coriolis effect is the deflection of rotating objects on Earth's surface as a result of the planet's own spin.)

But Hawaii is a small target in a big ocean, making is less likely that a hurricane will hit the islands. More importantly, the islands' westerly trade winds and cool sea-surface temperatures protect the state from powerful hurricanes, said Pao-Shin Chu, a climatologist at the University of Hawaii at Manoa and the head of the Hawaii State Climate Office. Hurricanes need warm water to fuel their heat engines. And the westerly currents set up an unfavorable wind shear (or change of wind direction as height increases). The combined effects decrease the intensity of approaching storms and keep them from getting too close. "The trade winds push hard enough on storms to keep them on a perfectly westward track," Businger said.

The most common storm track for hurricanes in the central Pacific is south of Hawaii, where the ocean is warmer and the winds more conducive to growing cyclones. Of the four hurricanes to have hit Hawaii in the last 60 years, three approached from the south. The strongest and most destructive, Hurricane Iniki in September 1992, snuck in when a kink in the jet stream sent the westerlies south, allowing the storm to track north.

Editor's note: This story was updated July 31 to reflect the four hurricanes caused major damage in the past 60 years, rather than making landfall.