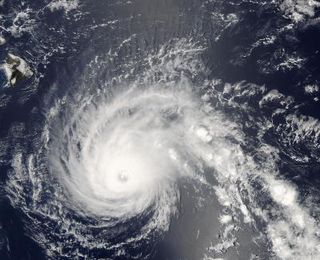 Tropical cyclones include hurricanes and typhoons, storms that form in the world's tropical latitudes and spin ferociously around a center called an eye. Only eight named tropical cyclones hit Hawaii between 1979 and 2010, said scientists at the University of Hawaii's International Pacific Research Center. But the researchers' new model predicts a two-to-three-fold increase in such storms between 2075 and 2099. The study is detailed in the May 5 issue of the journal Nature Climate Change.

The results illustrate how global warming can lead to strong regional climate differences, the researchers said. "Computer models run with global warming scenarios generally project a decrease in tropical cyclones worldwide. This, though, may not be what will happen with local communities," lead study author Hiroyuki Murakami said in a statement.

In the Pacific Ocean, tropical cyclones that could threaten Hawaii typically arise off the west coast of Mexico from June through November. But lack of moisture over the Pacific and strong westerly winds usually stop the storms from reaching the islands.

But the new model predicts that these westerly winds — called a subtropical jet and similar to the polar jet stream — will shift northward in the next 60 years, removing the roadblock. The projections also suggest the eastern Pacific Ocean will warm, giving storms more fuel in the form of rising moisture.

"The yearly number we project, however, still remains very low," study co-author Bin Wang said in a statement. Between 1979 and 2003, on average, one tropical cyclone pummeled the islands every four years. The researchers expect that number will double or triple.

The storm projections are based on a global climate model that includes the history of North Pacific tropical cyclones and a temperature rise of 3.6 degrees Fahrenheit (2 degrees Celsius).