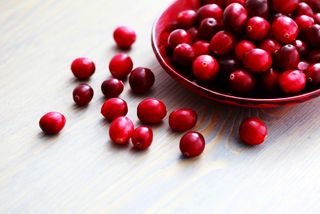 An old wives' tale might be held up by modern science: New evidence shows how cranberry juice might prevent or cure urinary tract infections, researchers say.

Cranberry juice has been touted for at least a century as a remedy for urinary tract infections (UTIs). Yet doctors remain divided over whether the fruit is truly effective in treating UTIs.

The largest analysis to date — a review of 24 studies including more than 4,400 patients, published in 2012 in the Cochrane Database of Systematic Reviews — suggests that any positive effect is minimal at best.

Millions of Americans, mostly women, suffer from UTIs each year, according to the Centers for Disease Control and Prevention. Most UTIs are treated effectively with antibiotics.

The limited evidence in studies regarding the effectiveness of cranberries, however, might be the way the fruit is used — as a drink, or as an extract in pill form, according to McGill University scientists. In their research, led by Nathalie Tufenkji, a professor of chemical engineering, they added cranberry derivatives directly to laboratory dishes growing two bacteria mostly commonly associated with UTIs, Escherichia coli and Proteus mirabilis.

The cranberry didn't kill these bacteria, but it did limit their ability to swim and thus spread.

The researchers' most recent study, appearing in June in the Canadian Journal of Microbiology, was on P. mirabilis. This bacterium spreads by swimming in swarms. The colony can be relatively immobile, but then suddenly grow elongated flagella, whiplike appendages to propel them to a new region to inhabit. [6 Superbugs to Watch Out For]

Tufenkji's group found that cranberry powder in a petri dish limited the growth of flagella and rendered the colony nearly motionless. Moreover, increased cranberry concentrations reduced the bacterium's production of an enzyme called urease, which contributes to the virulence, or severity, of infection.

The finding has important implications because P. mirabilis is the main bacterium behind UTIs caused by catheters in hospitals. Scientists think that P. mirabilis can migrate up the catheter into the urinary tract. So a catheter dusted or infused with cranberry might prevent infection.

Indeed, a second paper by Tufenkji's group, posted online in advance of publication in the journal Colloids and Surfaces B, the McGill scientists demonstrated this is possible.

"We showed that we can embed cranberry derivatives into silicone, which is a commonly used material to make catheters," Tufenkji told LiveScience. "Once the cranberry is in the silicone, we found that it is still bioactive; namely, it still prevents bacteria from swimming and spreading on the catheter surface."

Tufenkji's earlier work found that chemicals in cranberries called proanthocyanidins (PACs) similarly hindered the gene in E. coli responsible for growing flagellar filament. E. coli is the bacterium most associated with nonhospital-acquired UTIs. Women in particular can pick up this bacterium from frequent sexual intercourse; although unlike with a sexually transmitted disease, the bacteria are usually already on the woman, [S1] and sexual activity merely moves the bacteria toward the urethra.

Immobilizing bacteria — rather than killing it —is a good thing, Tufenkji explained. Bacteria are less likely to develop resistance to a substance that only is hindering their movement, as opposed to killing bacteria and preventing them from replicating.

"The mechanism of action is very different from antibiotics, which depend on killing the cells," Tufenkji said. "Our work to date suggests that the bacteria cannot develop 'resistance' to cranberry."

What happens in the body when one consumes cranberries remains a mystery. Scientists at the University of Rennes in Rennes, France, found that compounds in cranberries could block up to 80 percent of E. coli from attaching to the cells lining the urethra, in a laboratory setting. This study appeared in 2012 in the Journal of Medicinal Food.

Tufenkji stressed that her study doesn't validate that consumption of cranberries could treat UTIs. Antibiotics remain, for now, the UTI treatment of choice among most medical doctors.