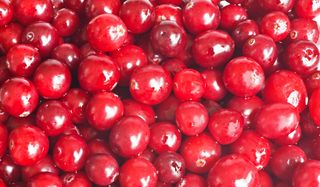 Although scientists are still not exactly sure how the fruit juice functions as a natural antibiotic, a new study has provided a bit more insight.
(Image: © Grafnata | Dreamstime)

Anyone who's had a urinary tract infection has probably heard of the centuries-old home remedy of swigging cranberry juice. The knowledge that cranberries fight the bacteria causing these infections comes in handy, especially as the overuse of prescription antibiotics forces new strains of drug-resistant bacteria to evolve. Although scientists are still not exactly sure how the fruit juice functions as a natural antibiotic, a new study has provided a bit more insight. A group of researchers at the Worcester Polytechnic Institute, in Worcester, Mass., investigated the nanoscale battle between cranberry juice and the infection-causing bacteria. How infections take hold The bacteria responsible for more than 95 percent of urinary tract infections are a pathogenic strain of the same E. coli bacteria found in the lower intestine. The problematic strain of E. coli carries on its surface tiny arm-like appendages called fimbriae that anchor the bacteria to the surfaces of urinary tract cells. If not for these fimbriae, the flow of urine would simply wash the bacteria away. But once they're securely latched onto the urinary tract walls, they quickly start reproducing. Bacterial cells can double within the hour, said Dr. Terri Camesano, a chemical engineering professor and lead author of the study. It only takes a few to eventually cause an infection. The medicinal characteristics of cranberries have been recorded as early as 1620. After a 1923 clinical study, scientists incorrectly thought that the tart, sour cranberry juice increased the acidity of urine , creating an environment in which bacteria couldn't survive. It wasn't until the 1980s that researchers realized the cranberry-induced acidity wasn't strong enough to kill the E. coli, Camesano said. Camesano's work shows that cranberry juice blocks the E. coli fimbriae from grabbing onto urinary tract cells. Cranberries contain large amounts of a chemical called proanthocyanidin, or PAC. PAC functions almost like a shield it forces the fimbriae to crumple so they can't attach to surface of the cells in the urinary tract. To test the strength of the cranberry juice "shield," Camesano and a team of researchers used a tiny probe on the tip of an atomic force microscope, which has the ability to sense the smallest of interactions between cells. They measured the strength of the bond between the infection-causing bacteria and urinary tract cells in the presence of different concentrations of commercially bought cranberry juice cocktail. The microscope's measurements showed that as the concentration of cranberry juice cocktail increased, the force holding a single bacterium to a urinary tract cell decreased. The researchers concluded that the more cranberry juice cocktail present, the less ability the E. coli had to grab onto the cell with its fimbriae. Unanswered questions But cranberry juice PACs can't really force the E. coli fimbriae to crumple when they've already attached to the urinary tract cell, Camesano said. Cranberry juice seems more effective at preventing future bacterial infections than treating an existing one, she said. Since the study, which was published online on June 21 in the journal Molecular Nutrition & Food Research, the team has also looked into how cranberry juice affects antibiotic-resistant strains of urinary infection-causing E. coli. We've seen the same anti-adhesive effect happen with drug-resistant bacteria, Camesano said. Even if prescription antibiotics couldn't kill the bacteria, she explained, PACs would still prevent the fimbriae from attaching to the urinary tract cell. So for someone prone to urinary tract infections, a few swigs of cranberry juice cocktail every once in a while might save a painful trip to the pharmacy later on.