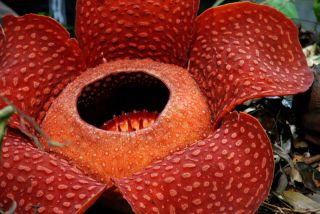 An enormous blossom that reeks of rotting flesh has bloomed at the U.S. Botanic Garden in Washington, D.C. But the plant, aptly nicknamed the corpse flower, or titan arum, is only one of several hundred species of plants that produces stinky blooms reeking of dung and rancid carrion.

But even in that relatively small number, there are a surprising variety of flowers that pursue this strategy, said Andreas Jürgens, a researcher at South Africa's University of KwaZulu-Natal. They smell this way to attract flies and beetles, which normally lay their eggs in feces and rotting materials. Tempted by the scent, the insects visit the flowers and inadvertently pollinate them before leaving. Sometimes they even lay eggs in the smelly flowers, although the eggs die for lack of food.

This ability to mimic foul smells and attract insects has independently evolved at least five different times in unrelated plant families, according to a study Jürgens co-authored, published this month in the journal Ecology Letters, which was the first to take a comprehensive look at all the flowers that employ the smelly strategy. This independent evolution of a similar strategy is an example of convergent evolution, which happens commonly in nature when different species find a niche, or way of living, that was previously unexploited, Jürgens said. [Foul Corpse Flower Blooms in Washington]

And how do the fragrant flowers produce their rancid smell? By emitting sulfur-containing chemicals like dimethyl disulfide.

"If I uncapped a vial of this in your office, it would clear it out," said Robert Raguso, a Cornell University chemical ecologist who wasn't involved in the study. "It's really nasty."

In the study, scientists compared the makeup of these floral scents with that of various rotting substances. Some of the delirious odors these essences resemble include lion feces, dead rats and the carcasses of rock hyraxes, according to the study.

Some of these plants are also capable of producing heat, just as carrion can become warm as it rots, Raguso said. The titan arum is a perfect example, producing heat after blooming. So too can the dead horse arum, a plant native to the Mediterranean islands of Corsica and Sardinia that smells like a dead Mr. Ed. This wily plant can also trap flies in its bloom for about a day, to ensure pollination, Raguso added.

Of course, the vast majority of flowering plants are quite different than those with rancid scents that mimic places to lay eggs, also known as brood mimics, Raguso said. Most species of the world's approximately 300,000 known flowering plants have blooms that are mutually beneficial, meaning they benefit the plant and the pollinator. For example, flowers like roses smell nice to advertise the fact that they contain nectar and pollen, both of which can be eaten by pollinators like honeybees. These plants are engaged in a relatively "honest" exchange, Raguso said: Bees get food and the flowers get pollinated so they can reproduce.

But in carrion- and dung-scented blossoms and other brood-mimics, there is no such reciprocity: The flower is "dishonest," and gets all the benefit, Raguso said. For that reason, though there are many plants that follow this strategy of "playing dead," they aren't easy to find and often have relatively small populations, he said.

"As a general rule, if you're going to cheat, you have to be rare," Raguso said. If too many plants took this approach, flies and beetles might catch on and learn to avoid them, and then these plants would die out.[Hold Your Nose: 7 Foul Flowers]

The plants hail from all around the world, although they are more common in tropical regions, where there are a wider variety of insects to carry out pollination, Raguso said. The fact that this general strategy has evolved five different times shows that this strategy of deceit can work, but only up to a point; there are only several hundred brood mimics, compared with the 300,000 total species of flowering plants.

The corpse flower is one of the world's largest blossoms, and certainly the tallest, Jürgens said. Technically, however, it is made up of many small flowers and is known as an inflorescence. The Earth's largest single flower is that of the plant Rafflesia arnoldii, which emits a sulfur-rich stench that has likewise earned it the name corpse flower.

It's unclear exactly why these smelly flowers are amongst the world's largest. It's likely because the plant needs to attract flies and beetles from far away, Raguso said. But little is known about these flowers, for the somewhat obvious reason that they smell like death, and most research involving flowers involves more pleasing odors, Raguso said.

Editor's note: This story was updated on July 22 to note that the D.C. flower is currently blooming.