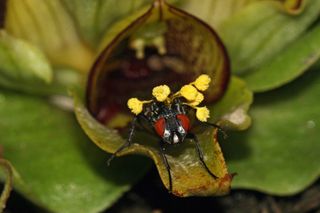 The orchid lures the flies into its carrion-scented boosom so the fly can pick up pollen and deposit it on other flowers.
(Image: © Dennis Hansen)

Stop and smell the roses, but steer clear of South African orchids. These flowers use the smell of rotting flesh to attract their main pollinator, the flesh fly.

"We know it's common for orchids to deceive insects into pollinating them. We also know that some plant species can mimic carrion to attract flies. What we didn't know was how successful this was," Timotheüs van der Niet, of the University of KwaZulu-Natal in South Africa, said in a statement. "Mimicry is often a very poor way to pollinate a plant."

The orchid Satyrium pumilum is found in South Africa, where it uses the relatively weak smell of rotting flesh to entice flesh flies. The flies are attracted to roadkill, which serves as food for their larvae.

"The flowers of the orchids are incredibly specialized. Not only do they have to entice flies in, but they have to get flies of the right size into the right position to pick up the pollen," van der Niet said.

Researchers had wondered how the flower attracted pollinators, because it doesn't use nectar as some other plants do. The flower actually has to be quite deceptive; most pollinators, like bees, reap sweet nectar food for their services to flowers, but the fly gets nothing in return for its visit to the orchid. The flies get covered in the orchid's pollen when they visit, and they deliver that pollen (grains of which ultimately become sperm cells) to the female reproductive part of another S. pumilum orchid.

"We've found that scent plays a hugely important role in pulling in the flies, and even inside the flower different scents attract the flies into the right location to pick up the pollen," van der Niet said.

The researchers found scores of these flies, covered with the flower's pollen, on the roadkill they found. The road corpses also attracted other flies, but they didn't show signs of having visited the orchid.

"The combination of smell and sight is irresistible to some flies. The level of carrion mimicry is amazing; we even saw a female fly leave larva in a flower because it thought it was carrion," van der Niet said. "It also disproves a cliché: You don't always catch more flies with honey."

The study was published in the March 14 issue of the journal Annals of Biology.