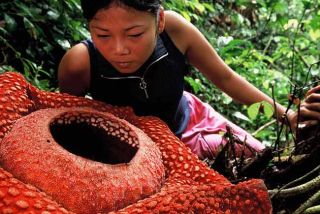 A woman leans over a rafflesia flower, which can reach three feet in diameter and releases a rotting-flesh odor to attract pollinators.
(Image: © Jeremy Holden)

The stinky heavyweight of the floral world never quite fit in with the other plants, until now.

And oddly, a group of scientists have decided that the bizarre desk-sized bloom [image] belongs to a plant family made up mostly of teeny blossoms.

Using genetics, the scientists solved a nearly 200-year-old mystery regarding the relatives of rafflesias, a group of plants whose flowers reach a petal-to-petal girth of three feet and weigh 15 pounds. The research, detailed today in the online version of the journal Science, identified the family to which the flower belongs, which includes natural rubber trees, poinsettias, Irish bells and cassava plants.

Rafflesia must have undergone a rapid growth spurt in its past, said lead researcher Charles Davis of Harvard University.

"These large flower plants, early in their evolution, experienced a size increase that was on the order of an 80-fold increase," he said.

Rafflesias are not to be confused with another record-breaker, the corpse flower. Unlike rafflesias, corpse flowers belong to a group of plants that includes the calla lily. The corpse flower has a cluster of flowers that extend to a height of eight feet and form a central spike. Within days of reaching full bloom, this spike collapses under its own weight and withers away.

First identified 180 years ago in Sumatra by naturalist Sir Stamford Raffles, rafflesia has baffled botanists trying to pinpoint its close relatives. That's because the flower is a parasite and lacks leaves, stems and roots--features typically used to identify and group plants. Rather than pulling water and nutrients from the ground, rafflesia attaches to and sucks life from grapevines.

Even genetic techniques, reliable for spot-on descriptions of organisms, proved troublesome. Scientists usually rely on DNA from chloroplasts--light-gathering structures needed for photosynthesis. Since rafflesia depends solely on a host for nutrients, and not photosynthesis, it lacks chloroplasts.

In the current study, Davis and his colleagues analyzed DNA found in mitochondria, the cells' energy-making machines.. Each plant cell contains up to several thousand mitochondria, each holding a complete set of genes.

The scientists suggest the flower's gigantism serves it by luring in pollinators--carrion flies that are attracted to the flower's rotting-flesh smell. On the rainforest floor, rafflesia is hidden by a dense carpet of taller vegetation. The flower's relatively vast surface area helps boost its scent, allowing more of the odor to radiate off the petals.

"Once the pollinators get in the vicinity, this really large stop sign that's on the forest floor acts as a nice visual attractant for the pollinators," Davis told LiveScience.

The finding could someday have horticultural uses, that is, if scientists pinpoint a gene or set of genes for gigantism.

"You can imagine isolating these genes," Davis said. "And horticulturalists would just love this stuff. You could make all of these horticulture monstrosities and roses that were 10 feet in diameter or something like that."