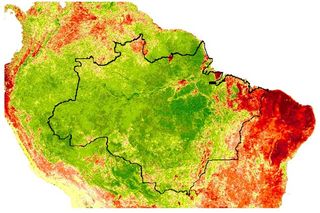 The green color in this image of South America shows vegetation that is growing during during the dry season. Reddish areas "brown down" in the dry season. The black line marks the boundary of the Amazon rainforest -- red areas within the boundary indicate areas where the primary forest has been disturbed.
(Image: © Terrestrial Biophysics and Remote Sensing Lab, University of Arizona)

Most plants do their growing during the rainy season and stall out when it's dry. But in much of the Amazon rainforest, dry spells bring on growth spurts.

"Most of the vegetation around the world follows a general pattern in which plants get green and lush during the rainy season, and then during the dry season, leaves fall because there's not enough water in the soil to support plant growth," said lead researcher Alfredo Huete of the University of Arizona.

"What we found for a large section of the Amazon is the opposite," Huete said. "As soon as the rains stop and you start to enter a dry period, the Amazon becomes alive. New leaves spring out, there's a flush of green growth and the greening continues as the dry season progresses."

The discovery holds true only for undisturbed parts of the rainforest.

What's going on? Deep roots of trees can reach water even in the dry season, the researchers figure, and so they take advantage of the added sunlight. Vegetation in areas that have been logged or converted to other uses can't reach the deep water, which might explain why it goes dormant or dies in the dry season.

Huete and colleagues detail their findings in the March 22 issue of Geophysical Research Letters.

The research is based on data from NASA's Terra satellite, which detects greenness. When they are actively growing, plants contain more chlorophyll and look greener.