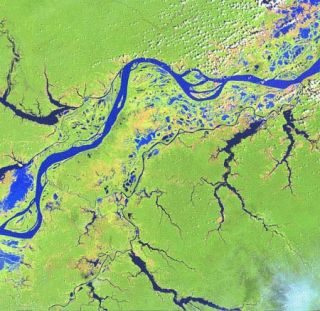 Bedrock under the Amazon river falls about 3 inches every year during seasonal flooding, then it rebounds as the river carries less water.

The finding was made using the satellite-based Global Positioning System and is reported in the journal Geophysical Research Letters.

Scientists have long known that parts of the planet sink and rise depending on what sits above. When glaciers melt over eons, for example, the land gradually lifts.

The new measurements of the Amazon represent the largest annual change ever seen in the planet's crust. Scientists had expected a 1-inch deformation. The much larger seasonal shift owes to the fact that scientists don't really know how much water is carried by the Amazon, the largest river system in the world.

"The old joke is, we know the discharge of the Amazon, give or take the Mississippi," said Douglas Alsdorf, assistant professor of geological sciences at Ohio State University.

The new method might be used one day to effectively weigh how much water is in the Amazon.

The method has limits, however. The scientists had to make assumptions about the composition of the bedrock beneath the river and of the shape of the river bottom. Their simplified computer model assumed a basic bathtub shape.

If the models can be improved, the scientists say similar global measurements and the computer models used to explain the 3-inch change in the Amazon could eventually be used to do a global water inventory.

"Nobody knows for sure how much water there is," Alsdorf said.