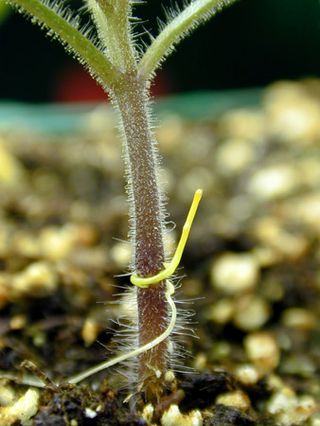 It may look like a benign spaghetti noodle, but a bizarre parasitic plant has some cunning moves. When the stringy dodder plant emerges from the earth, it sniffs out a plant victim in the first known example of an amazing form of plant communication.

Then it sucks the life out of the other plant.

Considered an agricultural pest, the dodder relies solely on other plants to survive and infests a variety of crops, including tomatoes, carrots and alfalfa, earning it a spot on the U.S. Department of Agriculture’s Top Ten Weeds List.

Now, scientists from Pennsylvania Statue University have discovered the parasitic weed can sense airborne chemicals released by host plants and then steer in that direction. The finding, detailed in the Sept. 29 issue of the journal Science, shows for the first time that plants can "chatter" with one another, helping to resolve a decades-long debate about whether volatile chemicals are involved in plant-to-plant interactions.

Attack of the dodder

Once a dodder seedling pops its head above the soil, the clock starts ticking before it latches on to another plant or dies.

"One thing about dodder that makes it essential for them to be able to find this host is that they don’t form roots," said co-researcher Consuelo De Moraes. The dodder can’t even produce its own food through photosynthesis like other green plants.

Its only resource is a pocket of food stored in its seed, which lasts just days, allowing the plant to grow no more than four inches.

"If they take the wrong direction they are pretty much doomed," De Moraes told LiveScience.

Once the dodder sniffs out a host [video], it slithers counterclockwise up the host’s stem [image]. Small bumps along the dodder’s surface puncture the host’s stem and begin sucking out nutrients from the phloem, a tube that conducts food up a plant.

"So they just have the phloem flowing right out of the host into themselves, and bringing with it all the stuff that’s in there, all the resources that are floating around," said co-researcher Mark Mescher.

Scientists had thought the parasitic plant used a hit-or-miss tactic, and any hook-up was the result of a chance encounter.

But a lab experiment found 80 percent of the dodders grew toward a tomato plant. And when they tried to trick the dodder with artificial tomato plants and pots of moist dirt, the dodder didn’t take the bait. Its shoots didn’t grow in any particular direction.

In an even more impressive feat, the dodders could distinguish between a good host plant, such as the tomato, and a poor one such as wheat. When placed in the middle of wheat and tomato plants, the dodders swayed aboveground in circular movements in the direction of the tomato plants.

"I think the more interesting thing is that they could make choices based on the volatiles. They could use that information to distinguish between a good host and a poor host," De Moraes said.

Chemical tests revealed the dodder plants were attracted to three airborne chemicals known to be released by tomato plants. One chemical produced by wheat plants actually repelled the dodders.

The researchers suspect the dodder is equipped with sense receptors that can sniff out hosts. Next, the researchers hope to figure out how this odor-sensing mechanism works and also how host plants defend against the stifling attack.