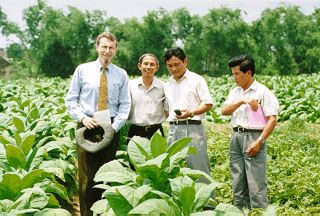 When sagebrush is damaged by insects, it broadcasts the predator's presence by releasing odors into the air. Other sagebrush pick up on the smells from their wounded brethren and get their defenses going.

Turns out wild tobacco plants eavesdrop on these signals.

The tobacco uses the knowledge to fortify its own defenses. Then it waits to deploy the arsenal if and only if the insect attacks. By holding off on deployment, the tobacco retains vital energy for other important tasks.

The proteins and chemicals used for defense contain nitrogen and carbon, which also are needed to produce seeds. It's a classic guns vs. butter tradeoff.

"By priming its defense response the plant is not investing resources before it is actually attacked," said Andre Kessler, an assistant professor of ecology and evolutionary biology at Cornell University. "This could be a crucial mechanism of plant-plant communication."

The discovery that tobacco could intercept signals from sagebrush came as a surprise, however. The two species rarely share the same habitat, and with rare exceptions, the same creatures rarely eat both plants.

The study was detailed in a recent issue of the journal Oecologia.