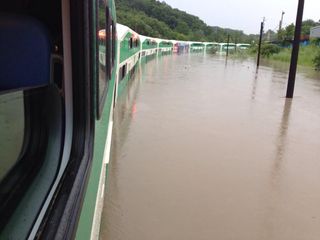 Nearly 4 inches (10 centimeters) of rain fell in just two hours yesterday in and around Toronto, triggering severe flash floods and stranding some commuter-train passengers for hours before police could rescue them in boats. At Toronto's Pearson International Airport, almost 5 inches (13 cm) of rain were recorded, which is more than the average rainfall the city typically receives for the entire month of July.

The heavy rain was generated by two separate storms that collided over the Greater Toronto area, a region that encompasses the city of Toronto and four surrounding regional municipalities.

"All that intense rainfall occurred when two thunderstorm complexes, one north of Toronto and one west of Toronto, merged," said Peter Kimbell, a warning preparedness meteorologist at Environment Canada. "The merger basically happened right over the airport and downtown area." [Video: Toronto Flash Floods Cause Traffic Chaos, Blackouts]

A lingering pattern of warm and humid air likely strengthened the storms as well, said Judy Levan, a warning coordination meteorologist at the U.S. National Weather Service in Buffalo, N.Y.

"We have a really rich stream of moisture coming up from the Gulf, so this pattern of air hasn't changed much," Levan told LiveScience. "That tends to make things worse, because you have these thunderstorms developing one day, and the next, and the next, so the soil becomes saturated and it can't even take as much rain."

As the term suggests, flash floods occur suddenly and unexpectedly when a deluge of rain falls over a short period of time. This type of flooding typically occurs when a slow-moving storm passes over an area, or when multiple thunderstorms gather over the same region, according to the U.S. National Weather Service (NWS), which operates as part of the National Oceanic and Atmospheric Administration. The slow-moving systems cause rain to accumulate on the ground faster than the soil can absorb it, leading it to wash over the surrounding terrain, building up in low-lying areas. Storms that move quickly over an area are less likely to cause flash flooding because the heavy rainfall is distributed over more expansive areas.

In the United States, flash floods are, on average, the top cause of weather-related deaths, according to the NWS, and almost half of all flash-flood fatalities happen when drivers in cars or trucks are swept away. Many vehicles, including city buses and a local commuter train, were engulfed in the Toronto floods.

Though topography can play a role in the severity of flash flooding, Toronto's storms likely garnered a lot of attention because the flooding occurred in the most densely populated part of Canada, Kimbell told LiveScience.

Still, yesterday's storms broke the city's long-standing record for the amount of rainfall measured in one day.

"The previous record was recorded during Hurricane Hazel, on Oct. 15, 1954," Kimbell said. "We haven't seen that amount of rain at the airport for the last 60 years or so. That being said, we do see significant storms that produce local flooding — and they'll continue to happen — but this one was just over an incredibly densely populated area."