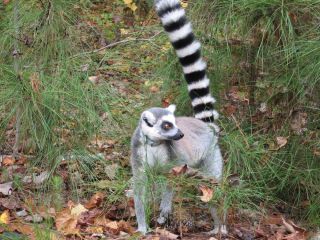 Ring-tailed lemurs emerge from the forest at the Duke Lemur Center. Lemurs trained to come at a trainer's signal are able to roam the fenced-in grounds freely.
(Image: © Stephanie Pappas for LiveScience)

Lemurs that come from big tribes and live in large groups exhibit more "social smarts" than those that live with only a few companions, finds a new study that suggests the size of a primate's social network could influence its social intelligence.

Researchers designed a series of experiments to test lemurs' social cognition. Essentially, the scientists were curious how lemurs process a situation — specifically, how they decide whether or not a human can see them — and then how they use that information in manipulative ways — in this case, to steal a piece of food if they think they are not being watched, said lead study author Evan MacLean, a senior researcher in the department of evolutionary anthropology at Duke University in Durham, N.C.

"There's an idea that animals that live in big groups develop important psychological abilities, because they have to figure out how to get their way in an environment where they can't always get their way," MacLean told LiveScience. [Images: Duke University's Lemur Center]

The researchers first taught the lemurs that humans are competitors by introducing them to food that human subjects eventually took away.

Then, in one of the tests, a human subject sat facing a plate of food as a lemur entered the room, while another human sat with his back turned. In another scenario, two human testers sat either facing toward or away from the food, with only their profiles visible to a lemur as it entered the room. In the third test, the human testers faced the food and the lemur, while either wearing a blindfold over their eyes, or a black band over their mouths.

The researchers tested 60 lemurs from six different species at the Duke Lemur Center, and found that species that live in larger groups of 15 to 20 individuals, such as the ring-tailed lemur (Lemur catta), were more responsive to social cues, meaning they were better at judging when humans could not see them, and therefore when they could successfully steal food.

"Lemurs who live in big social groups in nature were much better at using those cues to figure out what somebody could or couldn't see," MacLean said.

Lemurs that typically live in small groups with only two to three companions, such as the mongoose lemur (Eulemur mongoz), were less perceptive in their social abilities, he added. Lemurs from all species, however, had trouble in the third scenario, when humans had their eyes or mouths covered. For instance, lemurs did not readily understand that a person facing food with his eyes covered could not actually see.

"Some species of monkeys have been shown to understand those subtle conditions, but it was something that the lemurs didn't seem to get," MacLean said.

The findings appear to draw a link between social group size and cognition, but MacLean and his colleagues want to investigate the specific ways that being socially savvy improves intelligence, and an animal's ability to make social judgments.

The findings of the study were published June 27 in the journal PLOS ONE.