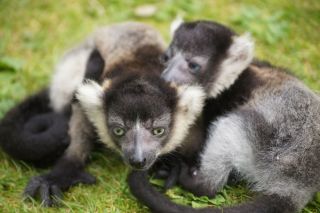 The latest arrivals are still young and have not yet been named.
(Image: © Belfast Zoo.)

A pair of white-belted ruffed lemur twins has been born at the Belfast Zoological Park in Northern Ireland.

"The whole zoo team is delighted with the new arrivals," said zoo manager Mark Challis. "Although we have bred other species of lemur in the past, including our 'ever popular' ring-tailed lemurs, this is first time that we have bred white-belted ruffed lemurs. They are actually very unusual as young ruffed lemurs do not cling to their mothers, like many other primates.  Instead the mother builds a nest to keep the babies safe and she will carry the young in her mouth.  However, the twins are now becoming more confident and mischievous and are beginning to explore their enclosure!"

White-belted ruffed lemurs are found on the island of Madagascar, which is home to a diverse range of species, many of which are unique to the island.  As the fourth largest island in the world, Madagascar is home to more than 80 different species of lemur. However, Madagascar has one of the most threatened ecosystems on the planet and more than 80 percent of its forests have disappeared since the 1950s, leaving many irreplaceable species in danger of extinction, the zoo noted in a statement.

The International Union for the Conservation of Nature (IUCN) considers this lemur to be facing an extremely high risk of extinction.  Deforestation is the main threat facing the white-belted ruffed lemur and they are also hunted for fur, meat and the illegal pet trade.

The arrival of the newborns "is extremely important to the European breeding program for white-belted ruffed lemurs as there are only approximately 50 of these lemurs in captivity, which means that every birth is fundamental to the future survival of these lemurs, Challis said in a zoo statement.