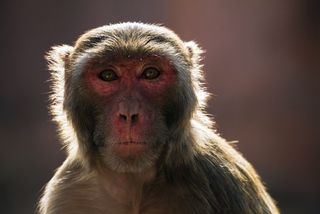 Humans and monkeys share parallels in a region of the brain that people use to infer others' intentions, a new study finds.

The research doesn't necessarily prove that monkeys have what is known as "theory of mind" — an ability to gauge what others are thinking and feeling. But the parallels may reveal the common ancestor from which both the human and monkey brain regions evolved.

"This does not tell us that macaques have theory of mind," study researcher Rogier Mars, a neuroscientist at the University of Oxford, told LiveScience. "It tells us that our theory of mind abilities are probably derived from more simple social abilities." [Top 10 Mysteries of the First Humans]

In humans, theory of mind is seated in a brain region called the temporoparietal junction, or TPJ. This area sits along the side of the head, toward the back of the skull, where the brain's temporal and parietal lobes meet.

Mars and his colleagues wanted to understand the evolutionary roots of this crucial region.

"We humans cooperate with one another to an extent far beyond that of other primates, leading to our language skills and our cultures. However, how our brain became capable of doing this while the brains of other primates specialized in another way is still largely unknown," Mars said. "A first step would be to establish which regions in our brain and in the brains of other species are evolved from a common ancestor. This would give us an idea of where to look when comparing the brains and behaviors of different animals."

To establish the TPJ's history, the researchers turned to macaques, monkeys that split from the evolutionary path of humans about 29 million years ago. Macaques may or may not grasp what other macaques are thinking, but they can predict other monkey behavior, studies have shown.

The humans were instructed to rest, as the scientists weren't interested in a specific type of activity, but rather in functional connectivity. Connectivity is a measure of what parts of the brain "talk" to one another. Even at rest, brain activity fluctuations reveal which networks are most closely related, Mars said.

Next, the researchers scanned the brains of 12 macaques, which were lightly anesthetized to keep them calm and sleepy in the scanner.

The scans revealed the patterns of connectivity in the human TPJ matched those seen in a nearby area in the macaque brain, the mid-superior temporal sulcus.

It would be too big a leap to take those patterns to mean that monkeys have theory of mind, Mars said — after all, the monkey and human brain regions have been evolving in their own ways for nearly 30 million years. But the macaque region is linked to monkey social cues, containing those neurons that are sensitive to eye gaze and body posture, for example.

"Our suggestion is that the human TPJ and monkey mid-STS are both derived from a common ancestral region that helped early primates navigate the social world," Mars said. "In the human, this region has expanded and become more specialized, able to predict more than just behavior, namely even intentions and beliefs."

Mars and his colleagues reported their findings today (June 10) in the journal Proceedings of the National Academy of Sciences. Next, the researchers hope to expand the work to other primates from a variety of social arrangements to see how brain organization might differ depending on how animals live.

"For me," Mars said, "what's interesting is that we can start to find out what is it that makes us different from monkeys."